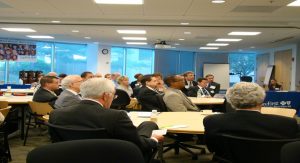 Statistics Canada looked at boards of directors across Canada in government, public and private sectors to study how many of them included women.

However, the number of seats held by women overall did increase in 2017 from the year prior. In 2016, 17.8% of boards had female directors, while 2017 had 18.1%. Still, the numbers conclude that less than a fifth of women held director seats across the country.

So while White Rock RCMP may have the highest percentage of female officers in Canada, the business industry in the rest of Canada still has a ways to go.