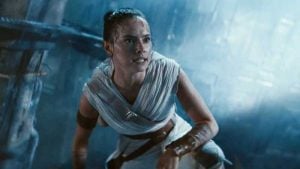 A Vancouver man was allegedly punched in the face during a screening of Star Wars: The Rise of Skywalker this weekend after breaking theatre etiquette.

The sequel had only been running for a few minutes at Scotiabank Theatre when the man, Joe Bond (no relation to James), started using his phone.

Staff had to pause the film to deal with the ensuing chaos, when the other person allegedly punched Bond.

Other moviegoers caught it all on video.

“I waited a God damned year for this and some [expletive] turned his phone on next to me,” the unidentified man said in the video.

This dude lost it when someone checked their phone screen during the opening of @starwars The theatre was forced to restart the movie from the beginning. The irony was beautiful. @globalnews @globalbc @ctv @cbcvancouver @bt_vancouver @cbc #vancouver #canada #starwarsfan @dailyhivevancouver

People in the video can be heard booing and then cheering once the irate man had left the theatre.

Bond was checking his phone because it was the first time him and his wife had left their two kids with a babysitter.

He pulled out the phone once during the movie, he said, when his neighbour noticed.

“He lost it at me,” Bond said to CTV News. “I told him to calm down and if he doesn’t calm down then I was going to get somebody – and then he hit me in the face.”

The theatre called the police, but the man had already left by the time they arrived.

“Star Wars fans are very serious people, but I think this guy was on the next level,” said Bond.