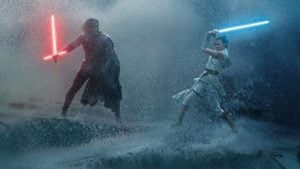 December is always a great month for movies, and 2019 is definitely no different.

Here are 5 of the must-see new movies this month.

Bombshell is the second movie/TV series this year to center around Fox News. The first was the 7-episode series The Loudest Voice, which focused on the rise of Roger Ailes, played by Russell Crowe. John Lithgow plays the Fox News CEO in Bombshell, which centers on the sexual misconduct allegations surrounding Ailes and Fox News. Nicole Kidman and Charlize Theron play Grethen Carlson and Megyn Kelly, respectively. Margot Robbie also plays a supporting role.

Watch If You Liked: Vice

Uncut Gems features Adam Sandler in a genre we’re not used to seeing him in: a crime-thriller. Sandler plays Howard Ratner, a New York City jeweler who makes a series of high-stakes bets that could be the ultimate score. The keyword here is “could“. The film is written and directed by the Safdie brothers, who directed the highly-stylized 2017 crime film Good Time, starring Robert Pattinson. NBA legend Kevin Garnett reportedly plays a large role in Uncut Gems, as himself.

Watch If You Liked: First Reformed

Star Wars: The Rise of Skywalker

Baby Yoda is taking over the Internet via Disney+’s The Mandalorian, but perhaps not for too much longer. The Rise of Skywalker completes the trilogy that began with The Force Awakens and The Last Jedi. Much of the cast from the first two movies will be returning, including Adam Driver as Kylo Ren, Daisy Ridley as Rey, and Mark Hamill as Luke Skywalker. Princess Leia will also be appearing, despite actress Carrie Fisher passing away in 2016.

In yet another women-centric film, Little Women tells a coming-of-age story based on the popular novel by Louisa May Alcott. The film is written and directed by Greta Gerwig in her highly-anticipated follow-up to 2017’s Lady Bird. Saoirse Ronan, who played the titular character in Lady Bird also stars in Little Women, which also features roles by Emma Watson (Harry Potter), Florence Pugh (The Little Drummer Girl), Eliza Scanlen (Sharp Objects), and Timothée Chalamet (Call Me By Your Name).

Watch If You Liked: Lady Bird

This is probably the film on this list that has receieved the least publicity, but whatever coverage it has gotten has all been near-praise. 1917 centers on two young British soldiers tasked with delivering a message warning of an impending ambush, during World War 1. The film is written and directed by Sam Mendes, director of Skyfall, Spectre, and American Beauty. The film was shot primarily using long choreographed takes, edited together in a way that makes the film appear to be a single continuous take. It will undoubtedly win technical awards come awards season.

Watch If You Liked: Dunkirk

If you liked this article, check out Netflix’s December releases, as well as Disney+’s new releases.