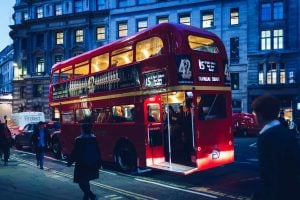 Vancouver streets may have a charming new look coming this November.

He said that the buses have are received extremely well in other areas, and already enjoy success in other parts of Canada, such as on Vancouver Island and in Toronto.

Translink previously tested 40-foot electric Chinese buses on select routes earlier this year in a test pilot, but they feel the double decker are a more viable option.

He noted that on the buses running between Everett and Seattle , “Their customers really love the double decker buses. They have better capacity than a 40-ft bus. A double deck bus can seat close to 100 people, and they’re pretty comfortable,” he said.

The pilot will determine the suitability of the buses in Vancouver’s streets, and also determine how drivers and passengers find the overall experience.

The exact routes for the suburban buses have yet to be disclosed.