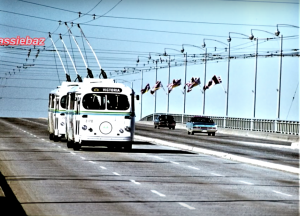 Because of the millions of trips taken through transit each year, Vancouver has seen an extensive evolution of its bus and transit services over time.

That continues to evolve with the talk of a SkyTrain to UBC and another stop coming to the Canada Line. But one video shows the transformation of buses in Vancouver, starting from the 1960’s.

TransLink took over bus services in Vancouver in 1998 and before then, it was – of all things – BC Hydro. BC Transit was a division of BC Hydro, which ran the service from the 1960’s to the ’90’s.

The city’s transit system however, originally began back in 1890 with the start of streetcars, run by BC Electric company. That ran until just after the second World War and in 1948, Vancouver got its first trolley bus.

McIntyre was 21 years old when he began working as a bus operator and did so for 41 years. Despite the changes in automobiles and uniforms, McIntyre said, “the transit service still remained the same.”

Do you remember the old buses and the paper tickets?

For more Vancouver stories, check out our History section!