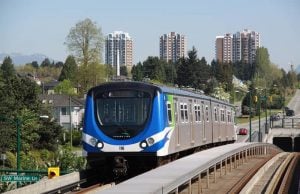 It’s official: Richmond is getting a new Canada Line skytrain station, expected to open in 2022.

The City of Richmond announced the news Tuesday, after transferring $28 million in funding to TransLink. This will cover the full construction of Capstan Station, located on No. 3 Road and Capstan Way.

The new stop will be in between Bridgeport and Aberdeen Station.

“This is an excellent example of how the City of Richmond works with developers and partners such as TransLink to build strong communities,” said Richmond Mayor Malcolm Brodie in a statement.

Planning first began in 2012, when TransLink and the City agreed to build a new station. Concept design began in 2017 after a $1.1 million transfer.

The city will also spend $500,000 on improving the public realm around the new station.

With 6,000 new residential units planned for the area, the new Canada Line station will help accommodate those living in the area.

The new station is expected to be complete by mid-2022.

The Canada Line currently has 16 stations connecting Richmond to Vancouver. In the meantime, let’s just hope that Canada Line workers, who are part of a different union than Expo and Millennium Line workers, can get a new contract worked out without having to take job action.