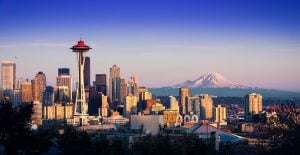 Do you, as a resident of British Columbia, feel a closer kinship with Toronto and Montreal, or Seattle and Portland?

A recent study conducted by Research Co. found that 66% of British Columbians believe they have more in common with the two Pacific Northwest cities, rather than the two eastern Canadian cities.

The study presented several statements to poll-takers and asked them to rate how strongly they agreed with each.

We, The Pacific Northwest

“British Columbians have more in common with the people of Seattle and Portland than with those in Toronto or Montreal”, was one of the statements.

This distribution remained fairly consistent across various other demographics.

“Moderately agree” and “strongly agree” were the answers that had the first and second-most answers, respectively, across all genders, ages, B.C. regions, and political parties.

The area with the narrowest gap between people who agreed and disagreed was with residents of the northern B.C. region.

There, 59% moderately or strongly agreed, while 42% moderately and strongly disagreed, or weren’t sure. (The results add up to over 100%, presumably, due to decimals and rounding.)

Whether or not B.C. residents identified themselves as British Columbians first, or Canadians first, also yielded interesting, if not somewhat self-contradicting, results.