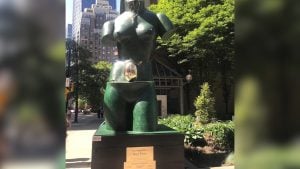 Easter has come and gone, but if you didn’t get the chance to participate in an Easter egg hunt, there’s a city-wide one you can join in on right now.

This is no ordinary egg, however. Not only is this egg golden, but it’s also a priceless piece of art that was stolen in plain daylight.

As part of the Chali-Rosso Art Gallery’s annual Definitely Dali exhibit, a 3.5 meter tall replica of Salvador Dali’s “Space Venus” sculpture was on public display downtown, at the intersection of W Hastings and Hornby Street.

RELATED: Richmond Has Approved The Installation of A Rainbow Crosswalk

However, on the morning of Saturday June 22nd, the giant golden egg featured in between the two halves of a torso, was stolen.

The sculpture depicts Venus, the Roman goddess of beauty, fertility, and love. It also features shocking details signature to the famous surrealist painter, such as two ants, and the golden egg. The top of the sculpture also features a melting watch, akin to those in “The Persistence of Memory”, one of Dali’s most well-known paintings.

While the sculpture on display was not the original (which is at the Dali museum in Paris), it is still a $2.8 million piece of art that allows millions of people to see the “Space Venus” without traveling to Paris.

While the loss has the Gallery Director, Oreegiana Copoulos, “reeling”, she also managed to maintain a sense of humour about it. Pondering the possible reasons a person might have to steal it, Copoulos said: “Unless you’ve got a big golden goose somewhere that needs an egg, I don’t know what you need it for.”

If you have any information about the whereabouts of this priceless golden egg, and you don’t have a golden goose, please contact the Chali-Ross Art Gallery or Vancouver Police.