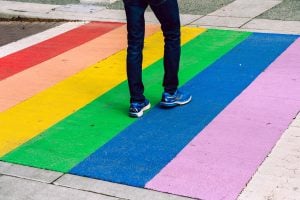 On Monday night, Richmond city council approved the installation of a permanent rainbow crosswalk in the city.

The motion passed 8-1, with only Councillor Chak Au voting against it. This new crosswalk will be located on Minoru Boulevard, situated near the Richmond Public Library branch.

The evening included public input, with plenty of supporters and opposition for the new artwork.

It’s estimated that the crosswalk will cost taxpayers approximately $15,000 to install, which many residents are not happy about.

Just last month, Port Moody unveiled their own rainbow crosswalk, which was installed in the 200-block of Newport Drive.