While Stanley Park is known for its natural beauty, some of its most famous highlights were actually imported.

For example, the park’s lost lagoon is one of its most picturesque features. With that being said, it is a relic of the 1934 world’s fair in Chicago; it was purchased to celebrate the city’s Golden Jubilee.

In fact, even one of the park’s animals isn’t a native species. The Eastern Gray squirrel, arguably the cutest, has the most voluptuous tail of all the park’s squirrels, and is considered an invasive species. These spritely critters are native to the East Coast, and rumour has it they were a gift from New York City; however, that point is up for debate.

Another one of the park’s unique features is the Stanley Park Gun. Every evening, the gun fires at 9 o’clock on the nose. In fact, most people know it as the “9 O’Clock Gun.” Some people may not realize that this is where the noise emanates from, but they likely hear its triumphant, booming sound.

This old gun is hardly 3km from my place and I have heard its blast for 7 yrs at 9 PM but I had never seen it in action until today. #onemorethingoffthelist #vancouver #nineoclockgun #funnyvideos #funny #travelvancouver #tourismvancouver #stanleypark #stanleyparkseawall #stanleyparkvancouver

Similar to the squirrels and the lagoon, the gun is an import. Cast over 200 years ago in England, it is an incredible historical structure. Specifically, it was cast in 1816 and subsequently shipped to Canada. Afterward, it was installed in the Park over 50 years later.

Back then, the gun was used to warn fisherman of the end of each fishing day, meaning they had to return. Back then, it fired at 6:00 PM to signal the day’s end. 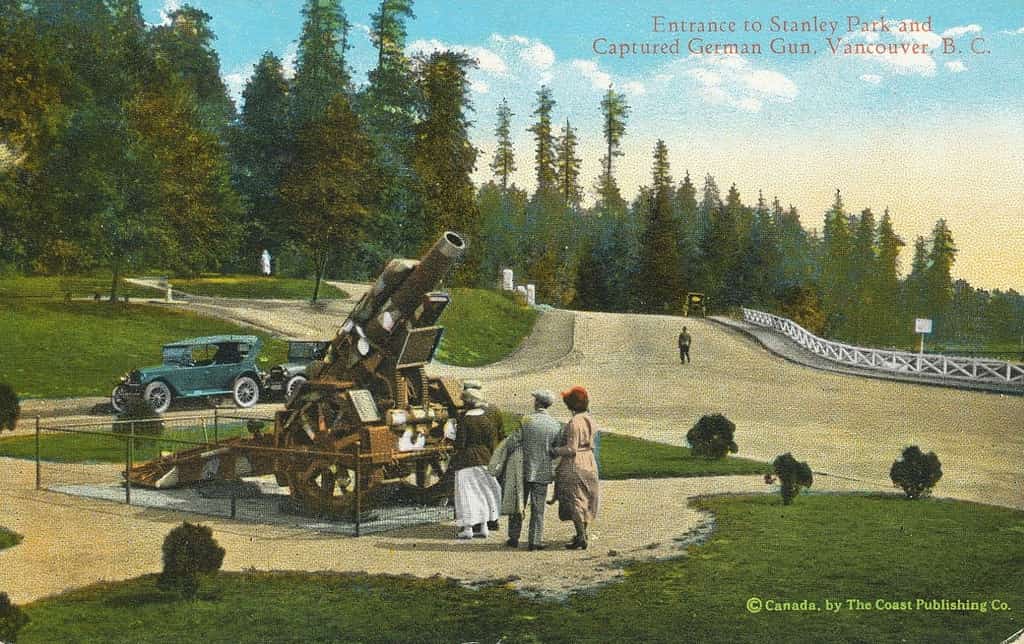 While its origin story is fascinating, it still begs the question: why is it in a cage?

Indeed, the structure has seen its fair share of issues over the years, from people painting its surface red to others jamming it with rocks. What’s more, it was even stolen.

“The gun was stolen by engineering students from the University of British Columbia — a considerable feat of engineering given that the gun weighs 1,500 pounds. Upon its return, the gun was encased in a stone and metal cage — for its protection as well as that of unsuspecting fuel barges,” reports the LA Times.

As such, the regal structure remains encased, to try and ward off prospective vandals and thieves.

While the park is beautiful, many feel that its name represents Canada’s dark colonial past. As a result, there has been a great deal of discussion around changing its name. The debate goes to council in September 2018.