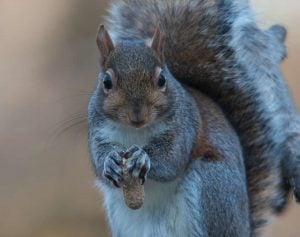 They are undeniably one of the most beloved features of Stanley Park. From their cartoonishly bushy tails and spritely hop, to the way they nibble on nuts with their tiny paws, the resident squirrels are fan favourites.

While there are other a number of species within the park, one stands out from the rest. The Eastern Gray squirrel, arguably the cutest, has the most voluptuous tail of all the park’s squirrels. In addition, the park has a number of Douglas squirrels, as well as the Northern Flying squirrel.

What makes the Eastern Gray squirrel the most interesting, however, is when it first appeared in the area. While the others have been around for quite some time, the Grays were introduced to Vancouver in 1914. In fact, some say that they were a gift from New York’s Central Park, and came in a group of 8.

With that being said, how they got here is a bit of a debate. A document in the Vancouver Archives shows a transaction that seems to suggest the city acquired a dozen of the fluffy creatures from Pennsylvania in 1910. Whichever the case, they are not a native species. Thus, they now represent a resident invasive species, as cute as they may be!

Although they are typically grey, they may also be reddish brown or black. The charming creatures often have a pearly white underside, in addition to their super bushy tail. In addition, they tend to be the more friendly and approachable of the resident squirrels.

Contrastingly, the Douglas squirrel is more standoffish, and tends to remain in forested areas. They are typically reddish brown and about half the size of the Eastern Gray.

While the Douglas is somewhat elusive, the Northern Flying Squirrel is rarely seen. Since they are nocturnal, they are rarely seen by park-goers. With that being said, they are spectacular, using their loose skin flaps to glide gracefully among the tree tops.

National Geographic recently named Stanley Park Vancouver’s most iconic place. The massive grounds cover an impressive 405 hectares, making it it is one-fifth bigger than New York’s famous Central Park. As such, its size, and proximity to the downtown city centre, make it a colossal oasis in the heart of Vancouver.

While the park is beautiful, many feel that its name represents Canada’s dark colonial past. As a result, there has been a great deal of discussion around changing its name.

Don’t forget to enjoy some time at the fresh air cinema this August at the park! Also, have a look at these vintage photos of the Seawall.