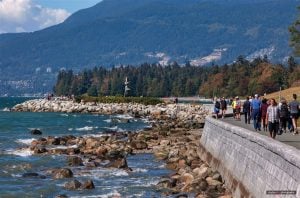 While a number of experiences were listed as must-do activities, the list also named a few of its must-see places.

What’s more, the list named the most iconic place to visit in the city: Stanley Park.

Renowned for its awe-inspiring size, the massive grounds cover an impressive 405 hectares. In fact, it is one-fifth bigger than New York’s famous Central Park.

“Stanley Park is unmissable. It’s amazing that a 1,000-acre park with formal gardens and primeval rain forest exists at the western edge of downtown Vancouver. Bike or walk around the 5.5-mile seawall, stopping for photos of totem poles, the Nine O’Clock Gun (a cannon that booms nightly), Siwash Rock, the “Girl in the Wet Suit” statue, and the iconic Lions Gate Bridge,” reads National Geographic about the park.

A serene sanctuary near downtown Vancouver, it offers a true escape from the hustle and bustle of the city centre. Moreover, it offers a number of fun activities, and things to see, such as the Vancouver Aquarium.

RELATED: Why These Mystical Islands In BC Are On National Geographic’s Must-See list

While the park is beautiful, many feel that its name represents Canada’s dark colonial past. As a result, there has been a great deal of discussion around changing its name.

Residents may think they know the park inside and out; however, this local gem has long and surprising history. In fact, there are a number of weird facts about the park that you may not know about.

Don’t forget to enjoy some time at the fresh air cinema this August at the park! Also, have a look at these vintage photos of the Seawall.