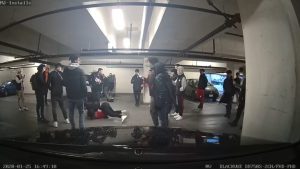 It was the Lunar New Year, but apparently some people in Richmond weren’t in a particularly celebratory mood.

Dashcam footage, shared to YouTube by MJ Installs, from a car sitting the parking lot at Richmond Centre caught a surprising scene almost straight out of Fight Club.

As the video begins, two young men are already on the ground fighting, as a group of over 10 other men form a circle around the fight. (They were really more so grappling than fighting.)

No one makes an attempt to break up the fight, and no one appears to be alarmed, leading one to think that the fight was amongst friends (or at least “acquaintances”). Many of the spectators are also filming the fight.

The “brawl” involved as many people as an infamous fight in Surrey’s Strawberry Hill neighbourhood from this past summer, except there was obvious beef and animus there.

In Fight Club, both the first and second rule of Fight Club are to not talk about Fight Club. In this day and age, perhaps the second rule should be to make sure there aren’t any unwanted cameras around.