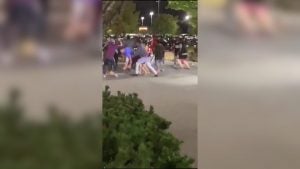 A chaotic brawl involving 10 or more people broke out in the parking lot outside Cineplex Cinemas Strawberry Hill in Surrey this past weekend.

A bystander in the area captured the latter portion of the incident.

The footage shows several young adults pushing, punching, and kicking a man in a blue shirt.

A similar brawl is happening in the background, involving a larger group.

A driver who attempted to pass through that area of the parking lot was forced the back away.

Police were not immediately notified of the incident, which took place Saturday night, but have been made aware of it since.

Surrey residents or people who frequent this shopping area recognize that this kind of incident is unfortunately common.

“We’ve witnessed young women being harassed when they go to the movie theatre, to the point where they break down in tears and don’t want to go back. In fact, one of my staff was harassed when she was there”, she added. Global News.

Constable Richard Wright of the Surrey RCMP said that patrol officers are familiar with the “hotspot” and will be upping police presence in the area further.

“We understand there are community concerns regarding the behaviour in the video,” he said.

Stay tuned to our News section for more updates on local happenings.