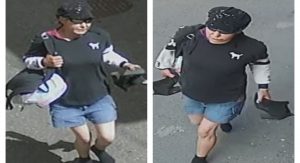 Metro Vancouver Transit Police need help locating a suspect who was involved in yet another racist attack.

The incident took place Thursday, May 21st, when a 17-year-old and her mother boarded a bus near Vancouver’s Pacific Centre.

A woman on the bus turned to the teenager, who was wearing a headscarf, and asked where she was from and if she was Canadian.

The woman then mocked the teen’s ethnicity and said something like “your smile is making me want to punch you in the face,” police reported.

The suspect then allegedly punched the teen in the head several times, before the teen’s mother and another passenger were able to separate them.

The suspect got off the bus at Hastings St. and Jackson Ave., where she was followed by a Good Samaritan who called 911.

When the suspect realized she was being followed, she allegedly took off her boots and began hitting the Good Samaritan.

When the woman pulled out a knife, the Good Samaritan backed off. The suspect then ran away.

Police described the suspect as possibly indigenous, about 40 years old, 5’8” and around 140 pounds.

She was wearing a black hat, dark sunglasses and a dark top that read “Pink” on the back. She also had on blue jean shorts, black boots and was carrying a silver backpack that changed colours in the light.

“There is no place for hate, racism or biases on the transit system,” reads the transit police news release. “All passengers using our transit system have the right to travel without fear of harassment or assault.”

This is one of many recent racist attacks in Vancouver, as the city has seen a spike in hate crimes this year.