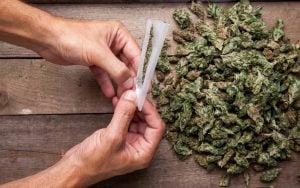 A cannabis shop owner pled guilty to a series of charges Monday and will be fined $250,000 for operating without a license.

Kevin Anderson sold cannabis at the Herban Art Collective for three years out of an art gallery in North Vancouver.

The Herban Art Collective was the city’s only shop selling recreational marijuana when it became legal in October 2018. But he was doing so without a business license and was denied one by the municipality.

Monday was meant to be the beginning of a five-day trial when Anderson pled guilty to more than 40 bylaw offences. That included selling without a license and using the premises for a use not permitted by the zoning bylaw.

Anderson said the shop stayed open as a way to help medical marijuana users in North Vancouver, since there were no other shops nearby.

“We were trying to help people out,” he told North Shore News. “That was our primary focus.”

He said the amount of time and investment that went into applying for a license and property is “incredibly difficult,” and expensive.

Sentencing for the case has been adjourned until later this month.