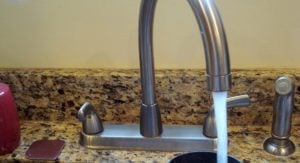 You may want to rethink drinking water from the tap, as tests show that the tap water in Metro Vancouver could be laced with high levels of lead.

The newly released data is the result of a year-long investigation. It was conducted by more than 120 journalists from 19 universities and media organizations.

Through 12,000 tests, it found that the levels of lead are the result of old infrastructure and plumbing.

The water comes out clean from municipal treatment plants, but that changes when it reaches older pipes connected to houses and apartments.

Many cites have said fixing this issue, however, may be difficult. Pipes underground may not be changed for decades. They also said coordinating replacements with property owners would be difficult because they would have to pay for it on the their side of the property line.

The tests collected data on 11 cities, but the City of Vancouver confirmed they are clear from this issue.

“The City of Vancouver would like to confirm that the City phased out lead pipes in its water distribution system in the 1980s and 1990s,” a press release stated.

Despite that, however, elevated levels of lead were still found in several Vancouver homes.

The city performs metal samplings twice a year in Metro Vancouver, where they analyze samples.

“We routinely test water flowing through our distribution system and can confirm lead levels are within Health Canada’s lead guidelines of five parts per billion,” the release said.