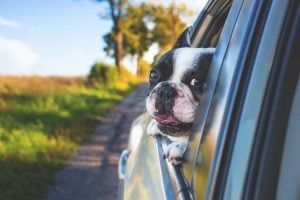 Traveling with Fido may feel non-negotiable for many drivers in BC; however, they may not realize the dangers inherent in doing so.

Of course, there is no law against driving with an animal in one’s vehicle, but RCMP are cracking down all types of distracted driving.

While the penalties for distracted driving refer to smart phones, there are other fines that encompass a much wider range of infractions.

For example, there is no definitive law against eating while snacking. Yet, you can still get slapped with a staggering $368 fine for doing so.

According to BC Driving Lawyers, “As a driver, you have a responsibility to ensure that you are exercising all the care and attention necessary to be a safe road user. Case law has stated that driving without due care and attention focuses on the manner in which a vehicle is operated.”

As a result, an officer has the right to determine whether you are taking the necessary precautions behind the wheel. While they still have to make a case that you were being careless, they may chose from a litany of variables. And, one of factors may include your furry companion.

Sarah E. Leamon, Barrister & Solicitor of Acumen Law Corporation, tells 604 Now: “For example, an inanimate object in a driver’s vehicle, like a water bottle for example, that rolls off the dash board and falls near the pedals, causing the driver to become distracted, could result in a charge of driving without due care and attention.”

#Michigan now #Arizona. More bans on pets on laps while driving are being proposed in #US https://t.co/ht4qqW32cc

Many groups in BC believe that pets should be completely banned on laps. In addition, various places in North America also support the idea.

Indeed, many states south of the border view the behaviour as inherently dangerous, and are considering an outright ban on the behaviour.