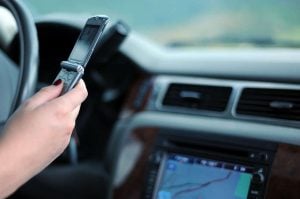 According to ICBC, one in four vehicle related deaths in British Columbia is the result of distracted driving.

In response, the government has imposed some strict penalties in an attempt to combat the epidemic. One of the highest fines is for eating while driving, which can land snacking drivers a whopping $368 in one blow.

Now, the government is moving to describe driving distracted as “high risk” driving. This means that the penalties are a great deal stiffer. If you’re caught distracted behind the wheel twice in a three year period you could get fined a staggering $2000.

Distracted driving covers a multitude of behaviours that the government states are dangerous or irresponsible. Even driving with two earbuds in instead of just one counts as a distracted driving offence.

“Currently about 12,000 people in B.C. have multiple distracted driving offences. The change will result in an extra $3 million to $5 million in additional premiums for the provincial insurance corporation,” reports CBC.

Not only will repeat offenders incur this enormous fine, but additional offences could mean a revoked license. They may not be able to drive for 3 months up to year.

Distracted drivers were responsible for 80 deaths in the province last year.