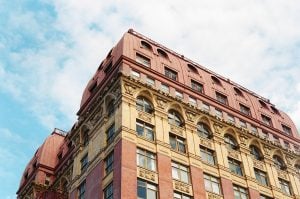 Vancouver’s oldest neighbourhood, Gastown is renowned for its legendary new age feel while still retaining its historic charm. Boasting legendary items such as the Steam Clock, 100 year old lampposts, and the classic triangular shaped Hotel Europe, Gastown’s history is one that holds Vancouver together.

The Naming Of Gastown

Gastown was named after Captain John Deighton, whose nickname was ‘Gassy Jack’. Can you guess why? Deighton loved to talk for hours on end.

Legend has it that he was one of the first settlers to reach the area in 1867, having boated his way to the Burrard Inlet area from New Westminster, the main area at the time. He offered the mill workers a drink if they would help him build his saloon, and about a day later, The Globe Saloon was up and running. 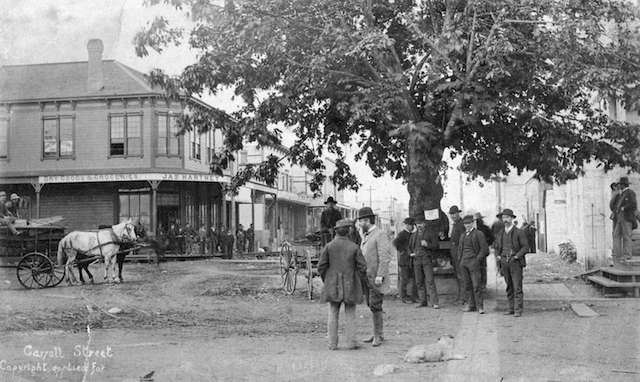 Others followed Gassy Jack’s footsteps, and soon the area became a cozy community right up on the waterfront. By 1870, there were enough people and small businesses for the area to be surveyed, and it was ‘officially’ named Granville Townsite, although there were a number of people who still referred to it by Gastown. The name fell into disuse until the 1960’s, where it was revived for good.

There were approximately 600 men residing in the Gastown area during the makings of the community, filling up approximately 12 buildings in the area. The city of Vancouver was incorporated in April of 1886, after a petition to the provincial government was started by the current residents.

Since the area was surrounded by thrush and an abundance of forest, it wasn’t exactly modern architecture central. The buildings were put together with wood, and because of the close proximity to the waterfront, most of the buildings were built on pilings. Roads were made up of dirt and mud, and sewage was dumped straight into the Inlet and washed away by the tide. All access to the area was by sea.

When British Columbia joined the confederation in 1871, the Canadian Pacific Railway was built just west of Gastown.

Two months after the city of Vancouver was incorporated, it was burnt down. 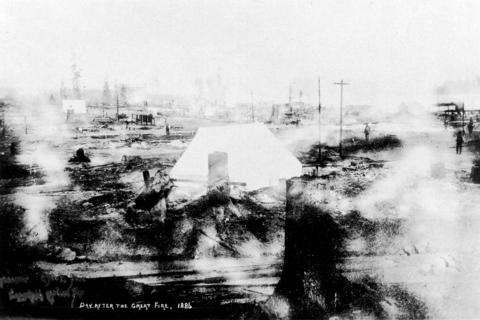 Now known as ‘The Great Fire’, the flames started all of a sudden and spread aggressively, burning down all but three buildings in under an hour. A crew of Canadian Pacific Railway men were keeping an eye on clearing the flames that were there the day before. The initial eruption started between Hamilton and Granville streets, and a gust of wind blew the fire into the streets. “Vancouver didn’t burn,” an eyewitness said. “It exploded.”

Growth Of The (Second) City

After the fire, the city was quickly rebuilt, making sure that this time the structures of the buildings were sturdier and built of brick. Two of the commercial buildings that were built after the fire that still remain standing today are the Byrne Building — Gassy Jack’s original saloon —, and Ferguson Block.

The regrowth of the old Gastown fuelled (nothing flammable this time) an economic boom. Gastown became a refuge for merchants and manufacturers, boasting a variety of artisan shops, retail, and second-hand stores. Bu the 20th century, it was known as the wholesale district.

The capitalism movement of Gastown soon turned westward, and the heart of the city moved with it. The Canadian Pacific Railway company owned land west of Gastown, and development was encouraged in order to boost land prices. The first Hotel Vancouver was built at Georgia and Granville. 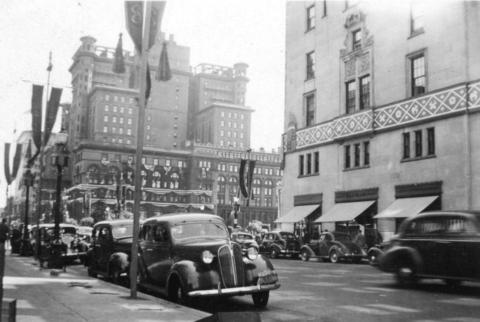 Not only that, but Hudson’s Bay Company was to build a store on the west side as well. Combined, those factors pushed the economic growth towards what is now known as Pender street. As a result, this left Gastown threatened and in the slumps.

Accommodation in Gastown was focused towards the unemployed and homeless, and that solidified during the years following The Great Depression.

Logging was still a big industry in the Granville area, bringing in From 1942-1944, Gastown was referred to as ‘Skid Road’, named after the heavy machinery that were used to take trees from the forest and transport them to a landing site. It was another name for an impoverished area, and the degradation of buildings increased that factor greatly.

The chain reaction that spurred the massive transformation of Gastown was a development project titled Project 200.

It was initially supposed to be for the waterfront area, and the buildings in Gastown west of Abbott Street were meant to be torn down and replaced. However, due to the large historic value the buildings held, that plan was later amended to spare most of the buildings.

While only 14 of the proposed buildings in Project 200 made it to completion, developers started realizing the potential of Gastown, and buildings started being restored and renovated.

Historic value played a big part into the rebranding of the neighbourhood. The name Gastown was brought back in ode of ‘Gassy Jack’, and retailers and businesses opened with a historic theme in mind.The city reluctantly agreed to the rebranding of Gastown, and pitched in, putting in items like brick paving, Maple Tree square, and the well-known steam clock.