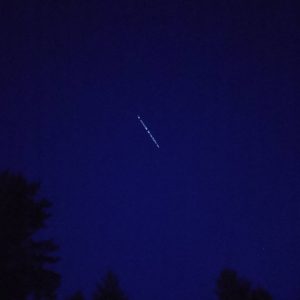 Did you happen to see a bright train of slow moving lights crossing the night sky?

The #UFO was trending Tuesday night when lights appeared in a long line (60 dots long to be exact) all over the Pacific Northwest. Similar to the lights that streaked across the night sky last month, many wondered what they were and the answer is—satellites.

Specifically, they were satellites launched by SpaceX, run by well-known entrepreneur Elon Musk.

This groups of satellites called Starlink is a project by SpaceX which wants to launch thousands of satellites to beam low-latency high-speed internet around the world from space. The hope is to use this to fund the mission to Mars.

The addition of these satellites to the night sky have created some controversy with astronomers though. As they claim that their presence would impact observations and slow down scientific progress.

Tuesday night also happened to be May 4th, so it may be ironic that the light sightings showed up then, on “Star Wars Day.” Even if you don’t believe in wishing “May the fourth be with you,” the lights are still cool to look at.

SpaceX wants to do 2 launches per month. Each time this is done they are placed 290km from Earth. While reaching operational orbits (which takes months to do) they become visible in the night sky.

So you may be seeing more in the future.

For more updates around Metro Vancouver, check out our News section.