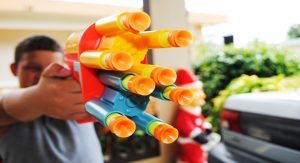 Delta police were called to a residence in North Delta just after 2 am on Wednesday, December 18th to respond to a shootout.

When they arrived, authorities discovered that the incident was between four men with Nerf guns.

They were unaware of the time or noise levels, stated the police. One had gotten a minor welt from the fight, but everyone was otherwise okay.

“Due to the early hour, guests were sent on their way before a winner could be determined,” they said.

Delta Police tweeted about the incident and cited, “#Delta, where big calls get small.”

If you liked this story, you may like to read about The ‘Price Is Right’ contestant who won a trip to Prince George.