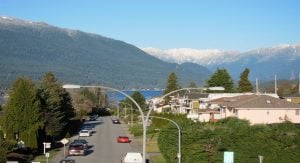 A mudslide in Burnaby caused a wall to collapse and forced residents of six houses in the neighbourhood to evacuate.

A five metre by 20 metre section of a retaining wall gave way Thursday morning, in the Westridge neighbourhood.

RELATED: Sechelt Oceanfront Homes Valued At $2 Due To Sinkhole Concerns

Thankfully no one was hurt, but it damaged a garage on the property below, said a city spokesperson.

“As a precautionary measure we emptied the houses in case of any further sliding of the slope or the remainder of the wall coming down,” said Burnaby public works manager Brian Carter to CBC.

Carter also said BC Hydro disconnected a line feeding power to the area. While power remained disconnected, residents were able to return home later that Thursday, after the mudslide.

The city was under a rainfall warning Thursday and is expected to get a lot more rain this weekend – with up to 65 mm. Hopefully that won’t make things worse, but as bad as it gets, it likely won’t be as bad as The Hope Slide, the second-largest landslide in Canadian history, which occurred here in BC 55 years ago this month.