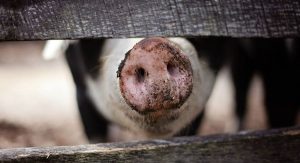 It’s clear Vancouver was a different place 100 years ago, but it may be surprising to hear about the city’s apparent fascination with blind pigs.

Starting in the early 1900’s, Vancouverites claimed they were heading downtown to see the anomaly and paid to get in and see it.

The most popular spots were a handful of clubs in an alleyway near Chinatown. Some claimed to host the vision-impaired animal, where people had to give a secret knock to get in and see it.

So why were people so obsessed with blind pigs? Because it gave them the chance to drink.

Most of Canada had a prohibition of its own, but it was shorter lived than the one in the U.S.

B.C.’s alcohol ban lasted from 1917 to 1921, where Vancouverites then welcomed bootlegging and illegal clubs of their own.

And while the term “Speakeasy” was used here too, the term “Blind Pig” was pretty popular as well.

There are two meanings behind this name: One being that the derogatory nickname for cops is “Pigs.” Many of these cops disregarded prohibition and would go to these clubs and turn a blind eye, therefore earning the nickname of Blind Pig.

But the other reason is because there were literal blind pigs, and other “rare” animals in the club. These clubs advertised themselves as something like a showroom, where people could pay admission to see these animals.

It was essentially a front for them, making it easier to sell alcohol in the background.

“I’m going to see the blind pig,” was an excuse people used without having to say they’re going to get smashed.

So with their admission to the speakeasy, often came a free glass of rum or whiskey etc.

When the Pigs Came to an End

Prohibition was short-lived here however as our province drank almost double the standard of every other province/territory in Canada.

People could get alcohol through prescriptions, which they did freely. So of the 400,000 people who lived in Vancouver at that time, doctors filled more than 385,000 prescriptions.

The ban came to an end, but strict drinking laws did not. And so, the blind pigs lived on, even until the 1950’s. But by that point, they were blind pigs by name only.

For more little-known Vancouver history, read about the story behind Stanley Park’s daily 9 O’Clock Gun firing, as well as the Great Vancouver Fire that destroyed our city just as it was born,

For more stories, check out our History section!