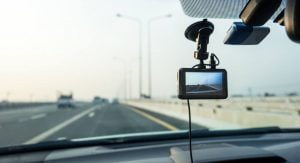 Imagine a world where you could trade in footage you capture of bad drivers on the road into ICBC for insurance discounts.

That’s the world one Burnaby resident would like to live in.

RELATED: ICBC Would Like To Install A Chip In Your Car To Monitor Your Driving Behavior

After more close-calls on the road than he can count, Tristan Calvo now drives or bikes with a camera on at all times.

He believes that ICBC should reward him, and other motorists, who successfully capture footage that results in insurance penalties or charges. Those instances happen almost daily, as we know.

“It’s dangerous to go out on the road. […] A lot of the times people are blowing red lights, stop signs. […] This is a way that doesn’t cost the government anything. When somebody does something wrong you initiate it, you send it in and you get a reward for it. The person that did something wrong gets penalized for it.”

Calvo has some first-hand experience with this.

In July 2018, his wife was riding in a designated bicycle lane when she was nearly struck by a tanker truck. Dashcam footage from a driver in the area at the time helped document the incident.

He has since written a letter to Attorney General David Eby, as well as Public Safety Minister Mike Farnworth about this proposed program.

What Does ICBC Think About This?

“We understand the value and the importance of [having video evidence]. But at the same time, it doesn’t reduce your chances of getting into a crash…or having your car stolen”, an ICBC spokesperson told Global News.

ICBC said that drivers who submit video evidence of any kind should not expect discounts of any kind on their insurance. If you’re okay with that, though, ICBC would be more than happy to take any video evidence.

The Ministry of Public Safety and Solicitor General reiterated a similar position.

This proposal as interesting and worthy of discussion for several reasons.

In the case of this proposed program, the reason why such a program would be worthwhile is that it helps create such an environment, forcing this self-regulation.

Of course, this notion has a strong “Big Brother is watching you” aspect, but one could argue that we’re already there because of smartphone cameras.

The second reason is that programs similar to this exist. Do you know who could potentially pay you for photographic or video evidence? News companies. Yes, news companies. (There’s a fantastic movie about this called Nightcrawler.)

It’s not as uncommon as it may seem; it’s just much harder in modern times, again because of how common smartphones are. But since it doesn’t seem like ICBC will get behind such a program, this will just have to do.