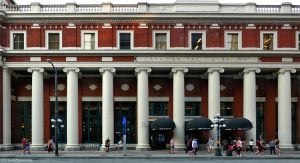 Despite its relatively young age, Vancouver’s buildings have plenty of history to tell and Waterfront Station is no exception.

First built by the Pacific Railway Station in 1915, Waterfront Station has had thousands pass through its doors. While most of those are alive and well commuters, some people can attest to seeing spirits wander the halls of the station.

Here are some creepy stories from Waterfront Station.

The book, Ghosts of Vancouver, has plenty of stories to tell, including one from a guard at Waterfront station. The guard claimed to have seen a woman who appeared in a red flapper style dress dancing alone on the West side of the building. The guard said he could hear the sound of 1920’s jazz playing, but when he approached the woman, she disappeared and the music ceased.

On the Northwest side of the station, another security guard was stopped in his tracks by the ghost of an old woman. He entered the empty room with nothing but a flashlight for a source of light when he saw her, “glowing phosphorous white,” as described on Ghosts of Vancouver. She looked mournful, he said. But when the woman reached out to him, he ran from the room.

Painting of a Woman

Yet another security guard told the story of being haunted by a woman at the station. He was in an old kitchen when he saw the old woman. He came face to face with the apparition, who stared at him intently. She started to float toward him when the guard panicked and ran away. But that wasn’t his last encounter. The man started to dream of her every night and saw her face in mirrors and windows. He had the urge to paint her, even though he wasn’t an artist at all. He brought the portrait to the old kitchen and left it where he saw the woman. That was the last time he had seen her.

Stephanie Watts of Ghostly Tours Vancouver told CTV News a man who worked at the station approached one of the tour guides. The man mentioned the old kitchen was still there and management had tried to move the painting. When they did, the painting’s mover began having dreams of the old woman. The painting was returned to its original spot and the mover’s dreams about her ceased.

Several people said they have seen the ghost of a headless railway worker outside the station. In 1928, a railway worker named Hub Clark was killed at work when he slipped on the wet railroad tracks. He was knocked unconscious when a train came by and decapitated him. Several people have since reported seeing the headless man with a lantern along the railway tracks.

Both security guards and commuters have attested to hearing footsteps walking on tiled floors late at night with nobody else around. Several people have also said they have seen the ghosts of three old ladies sitting on a station bench. Here’s a question for you to contemplate: What if those three old ladies were the woman from the first three ghost stories?