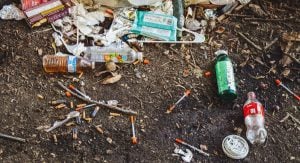 An average of three people died of overdoses everyday in B.C. last year, according to a recent study.

The BC Coroners Service announced data Monday, showing there was about 981 overdose deaths in 2019. The data showed there was at least one drug-related death on 330 of the year’s 365 days.

“More than 5,000 lives have been lost in B.C. since 2016 as a result of illicit drug toxicity,” Lisa Lapointe, B.C.’s chief coroner, said in a statement. “These deaths have deeply hurt families and communities across our province and represent an immense loss of potential in all walks of life.”

The 2019 numbers averaged to about 2.7 deaths a day. It tops the number of deaths from motor vehicle incidents, suicides and homicides combined.

And while that rate is down by 36% from 2018, it’s still comparable to the number of overdoses in 2016. That was the year B.C. declared a health emergency.

“B.C. continues to bear the heaviest toll of the impacts of the unpredictable, profit-driven, illicit drug market,” said Lapointe.

Provincial Health Officer Bonnie Henry said that although the number of B.C. overdoses has decreased, addiction is still a problem.

She told CTV News that there has also been an increase in the number of young people seeing long-lasting health effects from an overdose.

But Henry added that the province is doing what it can to address this issue.

“The measures we are taking to ensure access to services are there for people who use drugs when they are ready and able to start their path to recovery,” she said to CTV News. “In the meantime, we need to change our approach so that people who use drugs are able to seek help without the fear of being charged criminally and with access to a pharmaceutical alternative, instead of what is clearly a toxic street-drug supply.”