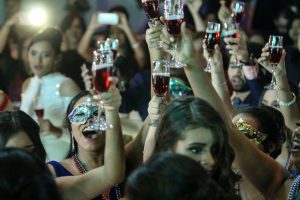 Several police officers have tested positive for COVID-19, after being called to an “out of control” party.

Ralph Kaisers, President of the Vancouver Police Union, tweeted about the incident on Friday. He said three officers caught the virus, while two full patrol teams are in self-isolation.

By the time police arrived at the party, more than 100 people had gathered, said Kaisers.

The Vancouver Police Department confirmed three officers tested positive, but did not provide any further details.