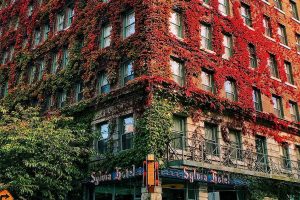 While it may not be the fanciest hotel in Vancouver, the Sylvia Hotel is certainly one of the most beautiful.

The sides of the building are covered with a lovely flourish of foliage, and it takes on exquisite orange, red, and yellow hues during the fall months. Passersby often stop to take snaps of the sweeping display, and the building makes multiple Instagram appearances during Autumn.

RELATED: 5 Fall Hikes Near Vancouver That Will Take You Through A Colourful Wonderland

While this is definitely one of the best spots to see fall’s colourful leaves, there are multiple places in Metro Vancouver that offer some spectacular viewing.

The Sylvia Hotel is considered a historical landmark in the Metro Vancouver. Built in 1912, the hotel was constructed for a gentleman by the name of Mr.Goldstein who had a daughter named Sylvia.

Originally built as an apartment unit, the building was converted into a hotel in 1936 following financial struggles during the depression.

The hotel was home to Vancouver’s first cocktail bar, which opened in 1954. It also held the title of being the tallest building in West Vancouver, until 1958. In addition, It’s considered a heritage building in the city, and has even inspired popular children’s books and folk songs.