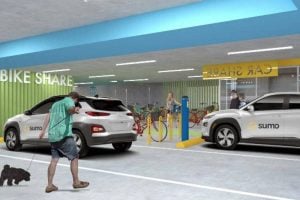 Shared Use Mobility Company, also known as SUMO, has announced the launch of its electric car share service in Metro Vancouver.

SUMO is a Surrey-based car share company that exclusively uses electric vehicles, a trend increasingly growing in popularity in British Columbia. (InOrbis, an all-electric ride-hailing company, has also announced that it’s coming to the province.)

It claims to be the first all-electric car share company in Canada.

According to the Surrey Now-Leader, SUMO will be launching with a fleet of 150 vehicles. However, the company is expecting to up that number to 2,000, by 2022.

At launch, the fleet will consist mostly of Hyundia IONIQs and Hyundai KONAs. The company’s website also mentions electric bikes and scooters, but no details about those have been announced.

As for why the company chose to dedicate itself to Surrey, the company simply stated that the reason was that “there is not yet a shared-vehicle service dedicated to South Surrey or White Rock.”

SUMO believes that when it comes to car sharing, quantity is critical.

“If you want to go and use a shared vehicle, you’re not going to rely on a shared vehicle and give up your car purchase if there are just a half-dozen vehicles around the whole city”, he told the Surrey Now-Leader.

In the meantime, ride-hailing is coming to Metro Vancouver in full force. Both Uber and Lyft have announced operations that are set to begin by the end of this year.

Surrey’s mayor has made it clear that he’s against ride-hailing. A car share service dedicated to Surrey, however, could be a different story.

For more news specific to your city, check out our Cities page!