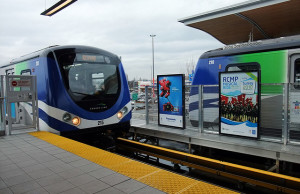 Police had to close down Bridgeport SkyTrain Station on Sunday after a TransLink driver spotted a grenade on the bus.

According to police, the incident happened at about 11 am, when a bus driver saw a grenade in a man’s grocery cart. Passengers then evacuated from the bus, and the Lower Mainland’s explosives disposal unit was called to the scene.

RELATED: Chilliwack Has The Highest Rate Of Homeless Women In B.C.

The unit then seized what they believed to be a grenade. The team will conduct tests to determine whether the item is a real grenade or not.

*UPDATE* Today our officers responded to Bridgeport Station in Richmond for a possible grenade on a bus. Out of an abundance of caution, our officers evacuated the area. RCMP EDU attended and have determined that the grenade was inert and had not been refilled with explosives.

Police arrested the man for possession of a weapon dangerous to public peace. But actual charges will depend on the explosives disposal unit’s testing of the object.

The SkyTrain station was closed for several hours before it reopened to the public.

Vancouver has seen several transit incidents in recent weeks, including a woman who was attacked on the SkyTrain, in what appeared to be a hate crime.