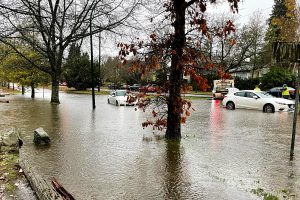 Heavy rainfall and flooding caused chaos across Metro Vancouver this weekend, and got worse on Monday morning, bringing chaos to the lower mainland

Downpour has caused flooding on multiple highways and landslides just outside Metro Vancouver and into the interior of the province. In addition, it has also caused a number of streets to be closed throughout the city.

The highway to Abbotsford was also flooded, cutting off much of the lower mainland from the rest of the province, with evacuation notices being put into place later into the evening.

Still not sure the source of this, several people are sharing, but this is the Whatcom Exit on Highway 1 in #Abbotsford just west of #Chilliwack.#bcstorm #atmosphericriver #flooding #bcflood2021 pic.twitter.com/lHQNyQA0VZ

Much of the Coquihalla was also damaged trapping drivers on the road.

Yeah – w/the rails being damaged – it’s a matter of time before supply issues occur. We’re slowly stocking up as a precautionary method. I recommend others do the same. Who knows how long it will take to fix the intense damage from the storm. #BCStorm https://t.co/isE63Wrf9Y

Footage shared to Twitter capture multiple pockets in Vancouver, Richmond, and other parts of the city heavily impacted on Monday. Power outages were also reported throughout Metro-Vancouver into Monday evening.

Holy crap! Did I mention how bad it is getting in the Valley? Hwy 1 at Bridal Falls where it is currently closed EB for a Mudslide… #bcstorm #shareyourweather @50ShadesofVan pic.twitter.com/7kCE4f4RfN

West 16th #Vancouver. The endowment lands are draining onto the city streets. pic.twitter.com/WOWOMlWiKM

Barge beached at English Bay in #Vancouver. Freezing salt sea spray made it too hard to get pictures with my main camera body so I had to use my iphone.
#BCStorm #Barge pic.twitter.com/lLFcOo81JD

The #AtmosphericRiver causing a bit of trouble on Eastbound 16th Ave @ Courtney St. in #Vancouver this morning… #BCStorm pic.twitter.com/0Vkyw6bxnt

Flooded fields and roads in #Abbotsford where city has called a state of local emergency. #BCStorm @VancouverSun pic.twitter.com/kzQanGbPRr

No sign of any tugboat as the barge made its way to the seawall and #Vancouver beach@CBCEarlyEdition @VIAwesome #BCStorm pic.twitter.com/5losqFftC7

In true Vancouver fashion, it comes as no surprise that Tuesday’s weather is sunny without a cloud in sight, a dramatic contrast to the day before.

Unfortunately, there is still a lot of damage from the aftermath of the storm. We hope everyone stays safe and dry.