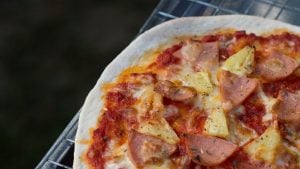 Do pineapples belong on pizzas?

Pretty much everyone agrees that pizzas are one of the human race’s best creations, but mix in some pineapples and everyone loses their mind.

Everyone loses their mind, that is, if they’re not Canadian, because Canadians apparently love pineapples on their pizza. (They don’t see to be that into Beyond Meat, however.)

According to Research Co., a firm that conducts polls on things like pizza, as well as things like national identity, 23% of Canadians would “probably” eat pizza with pineapple, while 43% “definitely” would.

Not convinced? There’s more. 63% of males would either “probably” or “definitely” eat pizza with pineapple, and 69% of females follow suit.

Across every major demographic segment included in this poll, “probably” and “definitely” received more ticks than “probably not”, “definitely not”, and “not sure”, combined.

Meanwhile, “Probably” received the second-most responses across all segments, except in the following segments:

So there you have it: Conservatives hate pineapples on pizza. (Joking.)

And in case you have some doubts about the study, or the people who participated in it, poutine also received its own poll, where every single segment, besides South Asians again, saw 70% or more people answer “Definitely” or “Probably.”

Maybe that’s the take-away here? Canadians really like pineapples on pizza, but we love poutine.

For more food news and food recommendations, check out our Food section.