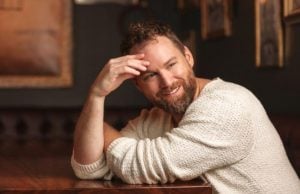 To change things up, he also plays Shaun in another Vancouver-filmed series – this time a rom-com drama; You Me Her starring Victoria-born actress Priscilla Faia, Greg Poehler and Rachel Blanchard. We chatted with Patrick about his different roles on TV:

How did you make the decision to move to Vancouver to pursue acting?

I was born & raised in Edmonton, Alberta. Edmonton is arguably the best city for live theater in Canada, but making a living in film & TV requires a move.

Having starred and appeared in so many sci-fi television series, were you always a fan of the genre?

Hard to be an 80s child & not be a sci-fi fan. However, aside from the Spielberg/Lucas productions I never ventured much further into the sci-fi genre. I’m a fan now, but I wouldn’t consider myself “fanatical.”

That’s a Season 2 wrap for me on @youmeher! So much Love to the crew & cast for the crazy fun! (S1 clip) #youmeher #directtv #season2 #brains #hipsterbartender #teteatete #beard

What’s it like to play Shaun in the comedy “You Me Her”? Do you share any traits?

Shaun was a surprise. The character was so small, but they film YMH in such an open, collaborative style. I was given some freedom to make him “colorful.” Shaun rambles & sticks his nose in other people’s business. Patrick rambles, but sticks to himself.

What’s it like to work with fellow Canucks like Eric McCormack and MacKenzie Porter in the Canadian co-production “Travelers”?

I’ve known Mack [MacKenzie Porter], a fellow Albertan, for years & have always loved her. Of course I knew OF Eric and, due to his Canadian heritage, I was confident he’d be wonderful to work with. I was right. Eric and I hit it off immediately and scenes with him are always a treat. He’s a master of timing.

“Travelers” has an intense plot centering around saving humanity – what about the series is most appealing to you?

The series is less about the mission & more about the individuals. That appeals to me. We empathize with characters because of their relationships, not their jobs.

What’s it been like to have been able to work on such a range of Vancouver productions? Any most memorable?

Vancouver has been up and down over the last 10 years. It’s exciting to see how busy it has become so soon after the “Save BC Film” movement. I’d have to say ‘The Killing’ was an exciting production. Not only for its stellar production value and world class talent, but the role I played was so against type. It gave me that same rush I felt in theater.

You have a camera in your phone. Use it. Start filming yourself. Learn lighting, editing, angles, lenses, timing, sound. You have no excuses. Stop talking about it. Just surround yourself with likeminded people and do it!