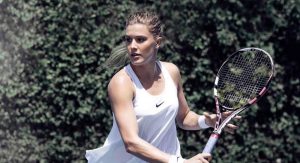 The Vancouver Open, currently sponsored as the Odlum Brown VanOpen, is returning this summer from Monday, August 12th to Sunday, August 18th at the Hollyburn Country Club in West Vancouver.

While it’s not the biggest tournament with the brightest lights, the Vancouver Open has seen several future-Grand Slam champions pass through, including: Maria Sharapova, who won the inaugural women’s single tournament in 2002; Andy Murray; and Naomi Osaka.

This year’s full tournament roster is yet to be announced, with the exception of four Canadians: Vasek Pospisil (born in Vernon, British Columbia), Rebecca Marino, Brayden Schnur, and most notably: Eugenie Bouchard.

The 25-year-old Bouchard rose to prominence during the 2014 Wimbledon Championships, when she became the first Canadian to reach a singles final. Her fame then soared to another level in 2017 after honoring a Super Bowl bet she lost by going on a date with a fan from Twitter.

Often criticized for behaving more like a social media influencer rather than a professional tennis player, Bouchard has been named Tennis Canada’s Female Player of the Year by Tennis Canada four times. She has also won the Bobbie Rosenfeld Award for Canadian Female Athlete of the Year, twice, and represented Canada at the 2016 Olympics in Rio de Janeiro.

Tickets for the 2018 tournament sold out, and this year’s tickets are now available, here.