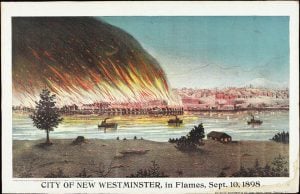 Downtown New Westminster is known for its many charming older buildings, which enable it to stand in for New York in classic Hallmark fare such as Once Upon A Holiday. However, the Royal City would have a lot more classic architecture if it wasn’t for one event: The Great Fire of 1898.

On September 10th, 1898, several tonnes of hay that were being stored on B&K Wharf on Front Street caught fire. The Hyack Brigade were alerted at 11pm, and by the time they arrived on the scene, the fire had received the warehouse’s roof.

From there, the flames spread north to the City Market, and in just ten minutes had reached the brick buildings on the other side of Front Street. A strong wind from the south-east meant that the firefighters had their work cut out for them.

Eventually, the Hyack Brigade was close to containing the fire at The Lytton (formerly the Caledonian Hotel), Lam Tung’s and Webster’s Building. At this point, things got dramatically worse.

Three steamers moored at the wharf (Gladys, Edgar and Bon Acord) now caught fire. The blaze cut their mooring ropes and the wind sent them drifting down the river, setting wharfs and warehouse aflame as they went.

The CPR Warehouse, also storing hay at the time, quickly went up, as did the Sinclair and Western Fisheries salmon canneries. From them, the fire spread to the adjacent block.

Empty streets and tattered houses with only remnants of the place it used to be, ghost towns are eerie and filled with history. Here’s a... 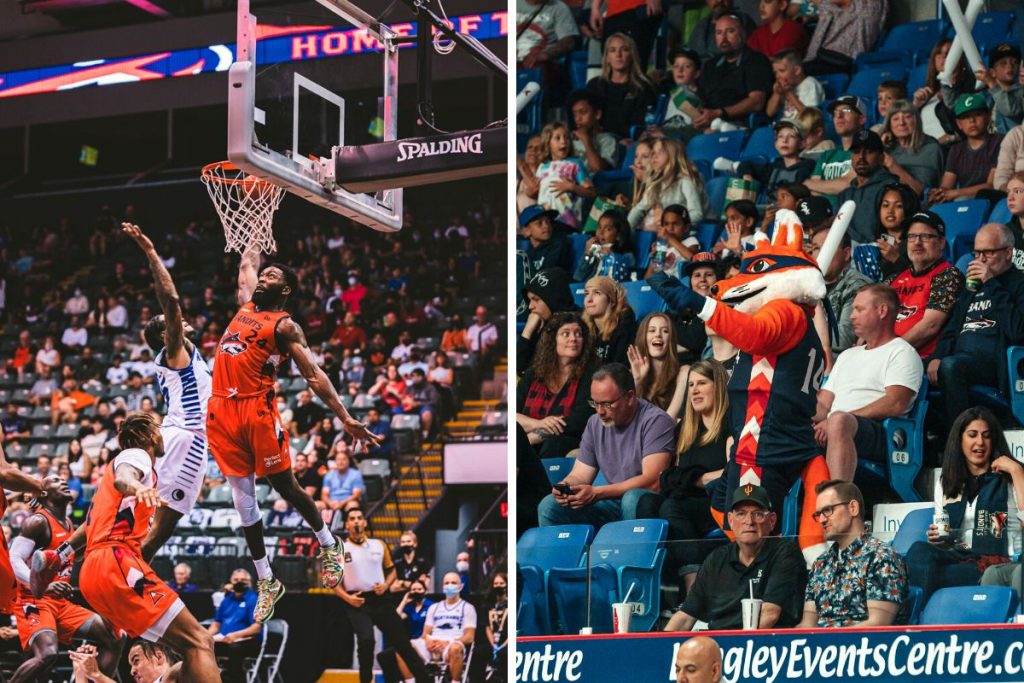 If you haven’t attended a Fraser Valley Bandits game yet, you will want to change that. The team offers one of the best live sports...

By now, the firefighters were at the bottom of Sixth Street, embattled between two blazes. Finding that position hopeless, Acting Fire Chief Watson decided to move his men to the Ellis and Powell block, aiming to cut the fire off there. The brigade kept at this task until their hoses burnt. Firemen at waterfront hydrants were also forced back to Columbia Street.

A blast of wind along McKenzie Street then spread the great fire to the northern side of Columbia Street. The entire area from the Market on Lytton Square to Carnarvon and Begbie was burning.

Hopes to save the northern side of Columbia were dashed when the fire jumped from the newspaper offices in the Powell Building to the No. 1 Fire Hall. The fire hall’s wooden frame meant it burnt rapidly. Flames also rose in the YMCA, Duncan McColl building, the Public Library, St. Leonards Hall and others on Clarkson Street.

Reinforcements arrived in the form of the Vancouver Fire Department and the ferry boat’s fire pump. With this help, the Burr Block was saved. However, little else was left when the blaze was finally beaten. Everything from Royal Avenue to the waterfront had been devastated. Damage was assessed at $2.5 million.

In the wake of the great fire, New Westminster created its fire professional fire department. The volunteer Hyack Brigade became the City of New Westminster Fire Department, with 10 employees and six fire halls.