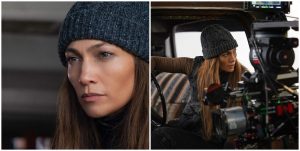 As you may have heard, Jenny from the block has been spotted on the streets of Vancouver filming this week.

Jennifer Lopez is here this fall on and off filming her Netflix thriller, The Mother. Although the last time she was only here for a brief visit, this time we know JLo was in Vancouver for sure. In fact, the star herself has now shared photos of herself while in our backyard.

Take a look at these JLo spottings, and the images she shared herself of the production.

RELATED: This Secret Cabin is one of Vancouver’s Most Popular Filming Locations

In the movie, JLo plays an assassin who comes out of hiding to protect her daughter. The rest of the cast includes Lucy Paez, Joseph Fiennes and Omari Hardwick.

The Mother started filming earlier this month, however it seems that production has ramped up recently. JLo was spotted in Vancouver with stunt doubles filming an action scene, as well as a scene at the airport.

In addition to that, JLo herself posted pictures of the Vancouver shoot on Friday morning, sharing some behind the scenes moments.

She tags Vancouver in the location, so we know for sure it was indeed super close by.

It’s said that production will continue until Friday evening, and the filming on The Mother is slated to continue for a couple of months in Vancouver.

Since the filming is not complete, it’s likely that the star will continue to be spotted in Vancouver. Regardless, if you are a fan or not, it’s always exciting to learn about an iconic superstar appearing, don’t you agree?