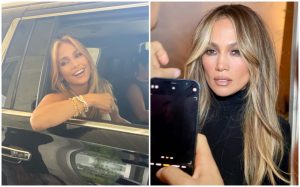 There’s a chance you can catch Jennifer Lopez, JLo, Jenny from the block around Vancouver this season.

The star was in Vancouver filming her upcoming movie called ‘The Mother’. The Netflix thriller is about a mother turns assassin, who comes out of hiding to protect her daughter that she gave up while she was on the run from dangerous men. Yes JLo is “the mother.”

It’s confirmed the Jennifer Lopez was in Vancouver on September 23. Residents around Victory Square, 200 West Hastings and 400 Cambie downtown Vancouver receive notice of filming this past week. The production company ,Great Lakes Pictures ULC, states that filming took place on September 23 from 7 a.m. to 7 p.m.

There were reports of actors filming a high speed chase, kidnapping scene and more.

On September 21, the production company had also noted that actors were rehearsing a scene where an actor jumps from the second floor of the EasyPark parkade and onto the top of “a passing cube truck.”

Although JLo has returned to New York, the filming has not fully wrapped up.

Filming on The Mother is slated to continue for a couple of months in Vancouver. Since the filming is not complete, it’s likely that the star will be coming back to Vancouver to shoot exciting scenes.

Today is Day 1 of prep for Netflix thriller #TheMother with Jennifer Lopez as a retired assassin.
Was last week’s shutdown around Victory Square a gigantic stunt rehearsal?
⏩https://t.co/XCKGevnXIC @JLo pic.twitter.com/Jf6ppsK7UQ

As a result, fans will have more opportunities to see this icon.