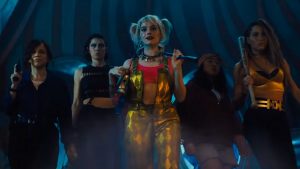 The first month of 2020 is in the books, and February is bringing us another solid batch of new movies.

Here’s some that should be on your radar.

Officially titled Birds of Prey (and the Fantabulous Emancipation of one Harley Quinn), the spin-off/follow-up to 2016’s Suicide Squad brings back Margot Robbie as Harley Quinn, who’s also serving as a producer. The movie centers on the DC Comics all-female superhero team, Birds of Prey, which includes Harley Quinn along with The Huntress (played by Mary Elizabeth Winstead) and Black Canary (played by Jurnee Smolett-Bell). Casting info also shows that Chris Messina will be playing Victor Zsasz and Ewan McGregor will be playing Black Mask, both of whom are villains in the Batman universe.

Watch If You Liked: Suicide Squad

After premiering at the Sundance Film Festival a year ago, The Lodge is finally hitting theatres in February, after much anticipation. The horror film stars Riley Keough (Logan Lucky, American Honey) as a mother with her step-children in an isolated cabin, and the film is receiving praise as one of the best horror movies of the year.

Downhill is not exactly getting rave reviews, but there’s an abundance of reasons to believe why it can still be a hit. For starters, the movie stars two comedic legends, in Will Ferrell (Step Brothers, Anchorman) and Julia Louis-Dreyfus (Veep, Seinfeld), who play a married couple that’s forced to reassess their feelings for one another. The movie is co-directed by two comedy regulars as well, in Jim Rash and Nat Faxon, both of whom co-wrote the screenplay with Jesse Armstrong, the creator of Succession, aka the greatest TV show currently airing.

Watch If You Liked: Daddy’s Home, The Campaign

The Call of The Wild

Based on the 1903 adventure novel by Jack London, the central character of The Call of the Wild is not a man, but a dog, named Buck. After Buck is stolen and forced to become a sled-dog, he grows increasingly feral as a response to his circumstances. It’s a story about being a product of one’s environment, something HBO’s limited-series The Night Of nods to. The film adaptation stars Harrison Ford (Star Wars, Indiana Jones).

Watch If You Liked: The Revenant, The Night Of

The Invisible Man is (very-loosely) based on the classic H.G. Wells novel of the same name, a science-fiction story that follows a scientist who successfully becomes invisible, but fails to reverse the experiment. In the movie, a psychological-horror film, a woman played by the award-winning Elizabeth Moss (The Handmaid’s Tale) begins questioning her sanity after suspecting that she’s being tormented by somebody nobody can see.

Watch If You Liked: Split, The Gift