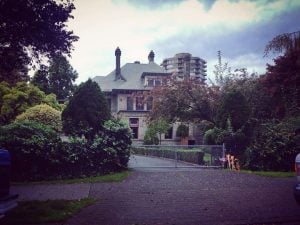 Located at the corner of Davie and Nicola Streets, the Gabriola House greets passersby with its ominous presence.

Once upon a time, there were a litany of impressive, grand homes like it in Vancouver’s West End; however, it is the last of its kind.

A relic of times long gone, this Victorian structure seems mildly out of place. Built at the turn of the 20th century, the home exudes mystery. As a result, it isn’t hard to fathom why the abode has been the centre of many paranormal tales.

When the mansion was a restaurant, for example, staff claim they encountered ghosts on a regular basis. Further, they claim that utensils, such as cutlery, actually floated in the air.

What’s more, the site was also the site of a horrific murder in 2016. Specifically, the body of a Japanese Student named Natsumi Kogawa was found inside.

Unfortunately for horror fans, this haunted home won’t be vacant much longer. The long-standing mansion will be converted into a rental condos and four townhouses put in its place. The mansion sold for a whopping $6.72 million.

Update: While the home is being converted, final plans do not include tearing down the structure. Instead, the building will undergo renovations.

Interested in some more spooky tales? Be sure to check out Vancouver’s creepiest urban legends!