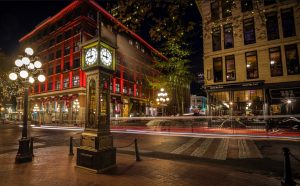 It’s officially the season for exploring some spine-tingling places.

What better way to spend the month then to get your spook on while having a meal at one of these reportedly haunted restaurants in Metro Vancouver.

Either it be a date night or just an evening out with friends, get your heart pumping with a good meal and a better ghost story. If you’re (un)lucky, you may even end the night off with spotting a ghost or two.

RELATED: This Local Pumpkin Patch Has An Enchanting ‘Pumpkin House’

The Spaghetti Factory’s Gastown location is known to be one of the most haunted places in the city. Experts say several spirits linger in the historic building both day and night. The restaurant’s trolley was first installed 50 years ago, but its vast history dates all the way back to 1904. Some ghost sightings include a train conductor and a young boy running around the restaurant.

Visit this New West restaurant that is believed to be one of the most haunted restaurants in the region. According to the Ghosts of Vancouver group, the restaurant’s basement storage area is home to multiple ghosts. They say on a number of cases, disembodied voices belonging to resident spirits have been heard in the restaurant.

This eatery is located inside downtown Vancouver’s historic Waterfront Station, which is believed to be one of the most haunted buildings in the city. Ghosts of Vancouver has reported multiple creepy sightings here, including a guard witnessing a woman in a red flapper style dress dancing alone on the west side of the building. The guard said he could hear the sound of 1920s jazz playing, but when he approached the woman, she vanished.

Discover this narrow four-storey building at the corner of Water and Cambie Streets, that is home to the Water St. Cafe. Ghosts of Vancouver has reported that a few years ago, when one of the floors was vacant, staff members heard inexplicable loud thumping noises on the floor above. They also heard the sound of something heavy being dragged across the empty room.

Visit this pub that is believed to house a spirit that likes to make its presence known near the bar. Ghosts of Vancouver says one night after closing, a bouncer who was alone in the pub heard the loud clanging of wine glasses hanging in racks over the bar. After investigating, the glasses were actually perfectly still. The bouncer couldn’t find any explanation for what he’d heard.

Many people believe that there’s a caretaker that used to work in the building and never left, therefore its spirit lives on here. Other ghost sightings include spirits sitting at the bar and a woman that is often heard roaming around upstairs.

This is another Gastown spot, that is also believed to be haunted. Although it’s a little more mysterious. While it’s not clear exactly what went down here, there have been some instances of haunted activity in the building. For example, some people report hearing footsteps when no one else is around.