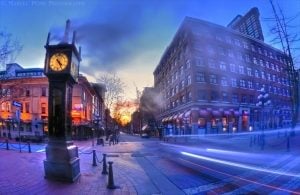 While the fall season is known for its beautiful display of colourful foliage and a variety of pumpkin inspired food and drink, it also known for its seriously spooky events and activities.

Some of these are completely man-made, and a ton of fun! Legions of people in the lower mainland head to events such as the ghost train in Stanley Park, the Surrey Scream Train, and Potter’s House of Horrors; however, some of Vancouver’s tours and tales are based on legitimately frightening stories and experiences.

Check out our list below for a sample of some of these bone-chilling legends!

Hotel Vancouver: The Lady In Red

Many urban legends are rarely believed because so few people have experienced them – this one stands apart.

The Lady in Red is practically a celebrity ghost, with an astounding number of people from all walks of life saying that they’ve seen her.

She is said to appear on the 14th floor of the Fairmont Hotel Vancouver, and is always seen sporting an elegant red evening gown. Believed to be a socialite while she was alive, the graceful ghost even has a drink named after her.

Some speculations say that she is the ghost of Jennie Pearl Cox, a woman that was struck by a car in the 1940s. Whoever she may have been, she is now a friendly poltergeist that means no harm (but may cause you to scream at the top of your lungs).

They say that @FairmontVan is haunted by the “lady in red.” She’s in this picture in a window near the top right. No Photoshop. #haunted pic.twitter.com/ZaSZYdJTm3

If it isn’t already creepy enough, the eerily dark road to UBC from Point Grey has a mysterious female hitchhiker waiting for a ride on rainy nights.

While the exact story behind the legend seems unclear, people say that it is always a woman that you’ll be picking up and that she is headed to a library. Apparently, the stranded apparition will even hand you a handwritten note with the library’s address on it before she promptly disappears.

Some people speculate that she was hit by a car after arguing with her boyfriend, while others say that this story grew out of various retellings of the tale.

Either way, it is creepy as hell!

The Strait Of Georgia: So Many Feet

While the Strait of Georgia extends extends a very long distance, it isn’t long enough to explain the numerous feet that have washed up on its shores.

Scientists say that the currents in the area may explain how the shoes traveled, but that doesn’t explain why they are there. Some of the feet have been identified, but there are still multiple that haven’t been.

The feet starting appearing back in 2007, and they continue to pop up. A young girl was the first to find a running shoe with a human foot inside along the shore.

Interestingly, and creepily, no other body parts have ever been spotted with the feet.

Rumor has it that the ghosts of people who did in the Great Vancouver Fire of 1883 run rampant through the old-fashioned streets of Gastown. The congregation wiped out most of the new parts of the city, and dozens of lives were lost in its engulfing flames.

The area is a fitting place for these spirits, because they are all known to appear in clothes of yesteryear. A man in a bowler hat can be seen strolling through its cobblestone streets and has been spotted in the Bodega Hotel. Other ghosts wearing similarly appointed styles have been spotted in and around the alleys and streets between Water and Cordova.

You may want to walk with a friend in these areas around Halloween (and possibly avoid alleys).

The Vogue Theatre: The Playful Ghosts

The Vogue Theatre is a popular venue for concerts and shows, and most of the time it’s packed with guests.

While it is usually bustling and busy, there are quieter times. It is in these times that a couple of mischievous apparitions like to get up to some fun.

Two spooky inhabitants are well-known to people working at the theatre, some guests, and even a couple performers. Apparently, one of the ghosts likes to open doors and stomp around, scaring people in the dressing room area.

The other is fond of dressing to the nines, donning a full tux with a bow tie. He likes to casually seat himself in the audience chairs, as if his presence was totally normal.

While these guys are mischievous, they aren’t known to cause any real problems (besides traumatize you).

Besides, no one ever said ghosts aren’t allowed to have a sense of humour!

If you’re brave enough to see some seriously spooky spots up close and personal, check out Vancouver’s haunted trolly tour this fall.