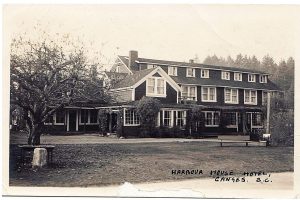 Horror enthusiasts can actually stay at one of BC’s most haunted hotels and inns, that is, if they dare.

These spooky accommodations have a spine-chilling past that might make those who visit have a less than restful night. From eerie sounds to vanishing figures, these spots will make for an exciting trip for thrill seekers looking for a fun night of ghost stories this fall.

RELATED: This Mansion Is Considered One Of The Most Haunted Places In Vancouver

Haunted Hotels In BC

This hotel in the heart of Salt Spring Island actually has a history of haunted behaviour. It’s believed that Harbour House is actually home to the ghost of the hotel’s owner Walter Herzog, who was murdered there. Guests who have stayed at the hotel have reported some strange activity, like lights going off and on and eerie sounds in the middle of the night.

Booking: Rooms start at about $180 per night via their website.

Those looking for a good spook might want to check out this Nelson landmark, originally built in 1898. The boutique hotel is believed to be home to a ghost that tends to linger around room 335 in particular. Some seem to think the ghost could be the man who opened the hotel. There was also a film made about it, appropriately called “Haunt At The Hume.”

Booking: Rooms start at about $150 per night via their website

While the Fairmont Empress is easily one of the most beautiful hotels in Victoria, it’s also believed to be one of the most haunted in the city. Many have reported various ghost sightings here, which include an elderly woman who goes knocking on guests doors and gets them to follow her to the elevator before she suddenly vanishes.

Booking: Rooms start at about $380 per night via their website

This elegant Victoria hotel also has a terrifying past. It is believed that the ghost of a woman wanders the halls. The creepy story behind the spirit is that she had witnessed her husband being beaten to death and then took her own life. She’s known to live within the walls and appear in mirrors from time to time.

Booking: Rooms start at $130 per night via their website

Everyone in Vancouver has heard the story of the “Lady in Red.” It’s believed the ghost haunts the iconic Fairmont Hotel Vancouver on West Georgia to this day. The hotel was built in 1939 and many who have stayed there say they’ve seen her, usually on the 14th floor. Ghosts of Vancouver states it all began when a Japanese family checked into the hotel and asked if it was double-booked after catching a glimpse of her.

Booking: Rooms start at $240 per night via their website

A post shared by The Inn at Spences Bridge (@theinnatspencesbridge)

The Inn at Spences Bridge was built in 1862 as a relaxing stopover for travellers during the Gold Rush. It’s one of the oldest hotels in the province and therefore, also has had its fair share of spooky stories. Some visitors have reported hearing sounds of people fighting overnight, as well as random tapping noises that have made it hard for some guests to get some shuteye.

Booking: You can inquire about the rates per night via their website