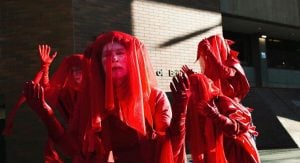 Extinction Rebellion Vancouver and Sustainabiliteens both lead the event as a way protest mass consumerism and its effects on the planet. The event started at 1 pm and went on until that evening.

Protesters walked through Pacific Centre, the skytrain stations and downtown streets, donning all black or red robes as they held a casket with the Extinction Rebellion label and the words, “our future.”

Whereas Sustainabiliteens staged a flashmob in the mall and held a free clothing swap outside Vancouver City Centre Station.

As a result of the funeral procession, six protesters were arrested, for stopping traffic and blocking a main intersection.

Lor Findlay, mother to Avalon, arrested earlier, has decided to take action, refusing to leave the intersection. We stand with her. #rebelforlife Thank you!

“Protestors perched themselves on top of the structures and refused to leave the area, despite several requests, and then warnings, from officers,” says a news release from the Vancouver Police Department.

The group held the protest on Black Friday, because the day brings out thousands of shoppers for mass sales. The two activist groups said they want to promote re-using and recycling.

Fast fashion is the second largest polluter of water and consumes 10% of the world’s carbon emissions.

The U.K-based Extinction Rebellion held similar protests around the globe, including ones in London, Melbourne and New York.

BLACK FRIDAY ACTIONS!!!⁣ ⁣*To sign up go to link in bio!*⁣ ⁣ Extinction Rebellion Vancouver knows that business as usual equals death. On Black Friday, we will be having a funeral procession to signify that if we continue down this path, the climate and ecological crisis will worsen, leaving us with a future of droughts, floods & starvation. Join us in black funeral attire at 1pm this Friday 29th, Art Phillips Park! ☠️☠️⁣ ⁣ After the procession, we will be hosting a disruptive post funeral “EarthWake” from 2:30pm at the Robson/Thurlow intersection. There will be a clothing swap where you can also print the XR logo on your stuff, a seed library, upcycled goods and performers.⁣ ⁣ Come and join us for a day of action! ⁣ #rebelforlife #greenfriday #extinctionrebellion

This is one of several climate strikes in Vancouver over the last few months. The first took place in September and brought thousands of activists out. Last week, the City of Vancouver took some action by creating by-laws that would ban single-use items.