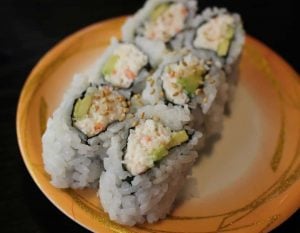 It’s no secret that sushi is popular in Vancouver. In fact, the city is thought to have more Japanese restaurants than anywhere else in North America.

And it doesn’t look like the booming business is slowing down anytime soon, either.

Indeed, the Japanese influence is prominent throughout the city, as well as the rest of the Lower Mainland. There are eateries specializing in everything from eccentric sushi rolls to upscale Japanese dining, funky tapas to sushi-inspired hot dogs.

RELATED: Calling All Foodies: Sushi Donuts Are Now A Thing In Vancouver

With that being said, Japanese items pop up in a multitude of other restaurants, too. In fact, most fusion restaurants carry a number of Japanese dishes. Big name chains such as Joey’s and Cactus Club usually carry one or two sushi rolls on their menus, and often feature a sashimi salad.

Of course, not everyone can stomach raw fish; some people find it repulsive. Dishes such as sashimi, raw fish sliced in thin slices and served with soy sauce, are an acquired taste.

Luckily, Vancouverites are privy to a wide variety of sushi concoctions, and some of them don’t even feature fish at all. While there are many of these options available, perhaps none are more popular on the West Coast than the California Roll.

Comprised of cooked, rather than raw, crab meat, as well as cucumber and mayo, this offering appeals to a much wider range of people. For those who are new to sushi, it’s a baby step into the world of rolled rice and seaweed.

What locals may not be aware of, however, is just how this roll came to be. Although it is called the “California” roll, its origins don’t lie south of the border. In fact, the famous sushi staple is a local creation.

Legendary sushi chef, or itamae, Hidekazu Tojo was born in post-war Japan before he made Vancouver his home. With a near encyclopedic knowledge of Japanese recipes, as well as an uncanny ability to make dishes appealing to a North American market, Tojo launched his hugely popular creations.

“For those who felt uneasy about eating raw fish, there was cooked crabmeat and avacodo, rolled “inside out” to hide the seaweed wrapper (another challenge for many). Thus was born what is now universally known as the “California roll”—not for its land of origin, but for the avocado. Today this is the staple sushi for millions of North Americans who have no idea that it originated with Tojo, in Canada,” reads the menu.

In addition, Tojo was the first chef to use smoked salmon in his recipes. He also used a variety of local ingredients in classic sushi dishes, which gave them a unique flavour; some of the creations are said to be even better than their counterparts in Japan.

Chef Tojo has been a big supporter of @thewellnessshow. He was at the Celebrity Cooking Stage this past Sat showcasing local tuna and wild rice, and demonstrating a delicious Valentine's Day dish. #wellness16 #celebritychef #chefsofvancouver #cheflife

While Tojo is usually credited with creating the roll, its origin is a point of controversy. Tojo didn’t coin the name “California Roll” however, he believes customers called it that because of the avocado inside of it. Regardless, his creations are unbelievably delicious, and he is a culinary pioneer.

Tojo’s is open everyday and located at 1133 W Broadway in Vancouver.

Want to try some other delicious sushi concoctions? Check out the amazing sushi tacos at this unique Vancouver eatery.