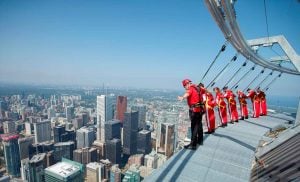 Let’s take a look at some of the top adventures here. 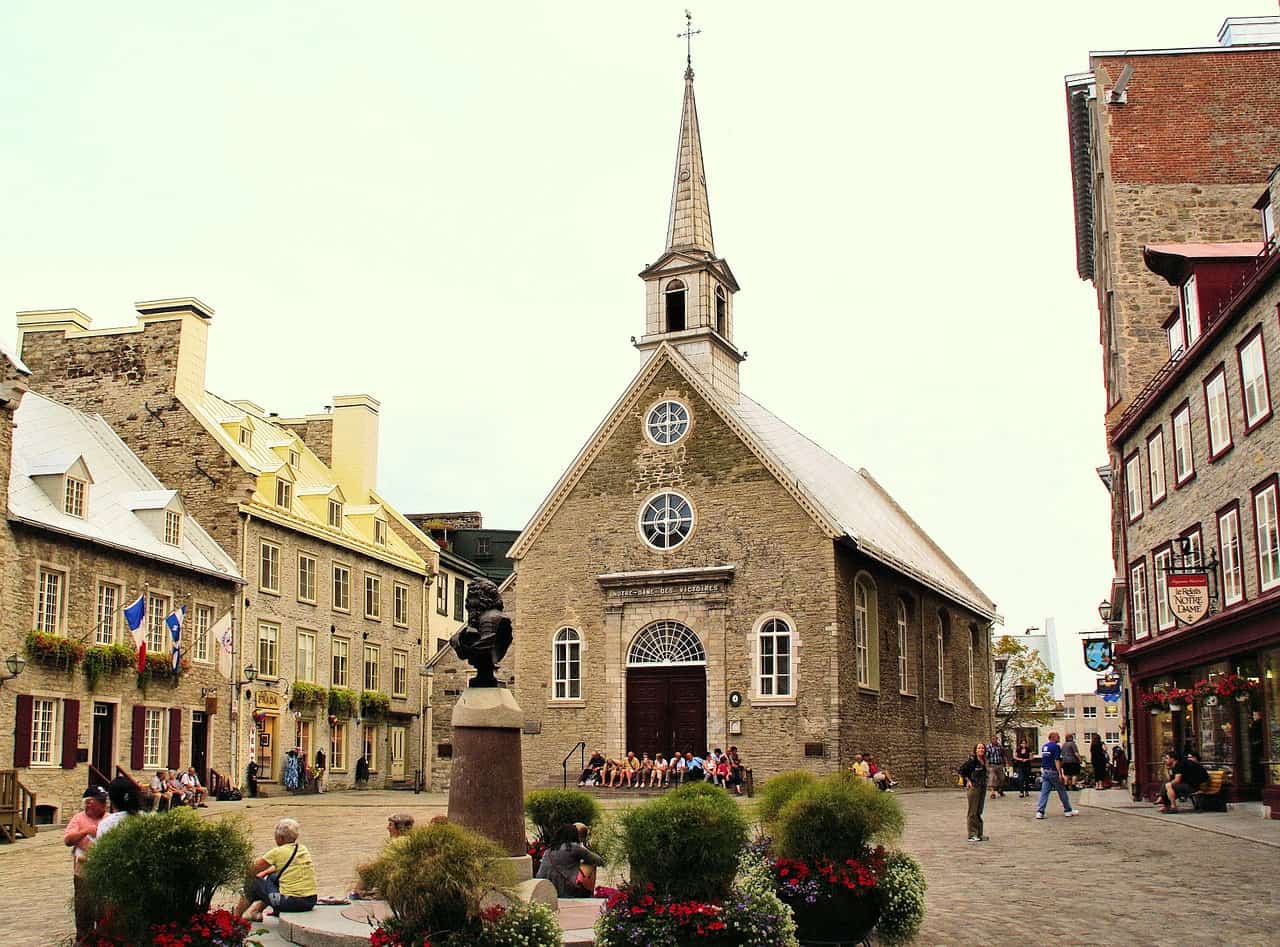 Old Quebec is a historic neighbourhood of Quebec City. In addition, it is a designated UNESCO World heritage site. Indeed, this walled city, with its twisting, cobblestone streets and cathedrals, seems transports you back in time. Moreover, there is a plethora of upscale food, shopping, and entertainment to enjoy. Notable landmarks in this historic gem include the Notre-Dame-de-Québec Basilica-Cathedral, the Cathedral of the Holy Trinity, the Jesuits Chapel, and St. Andrew’s Presbyterian Church. 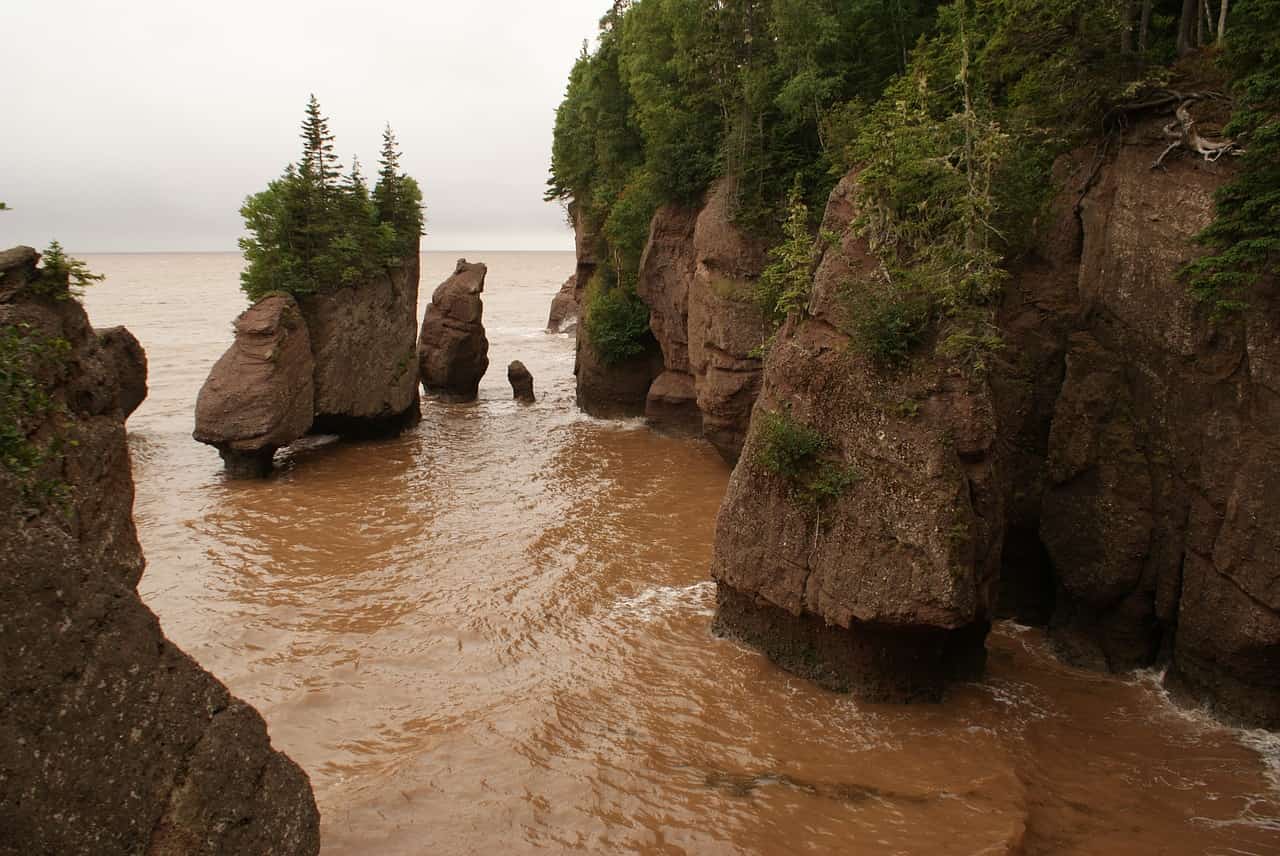 The highest tides in the world come in to this magical place twice daily every day. Located in New Brunswick’s Bay of Fundy, the incredible rock formations are caused by tidal erosion in The Hopewell Rocks Ocean Tidal Exploration. Towering 40 – 70 feet high, these mammoth rocks are incredible to view during high and low tides, and your entrance fee is good for two consecutive days. Some visitors reserve a kayak tour in advance and enjoy the unique experience of paddling around the flowerpot rocks at high tide. 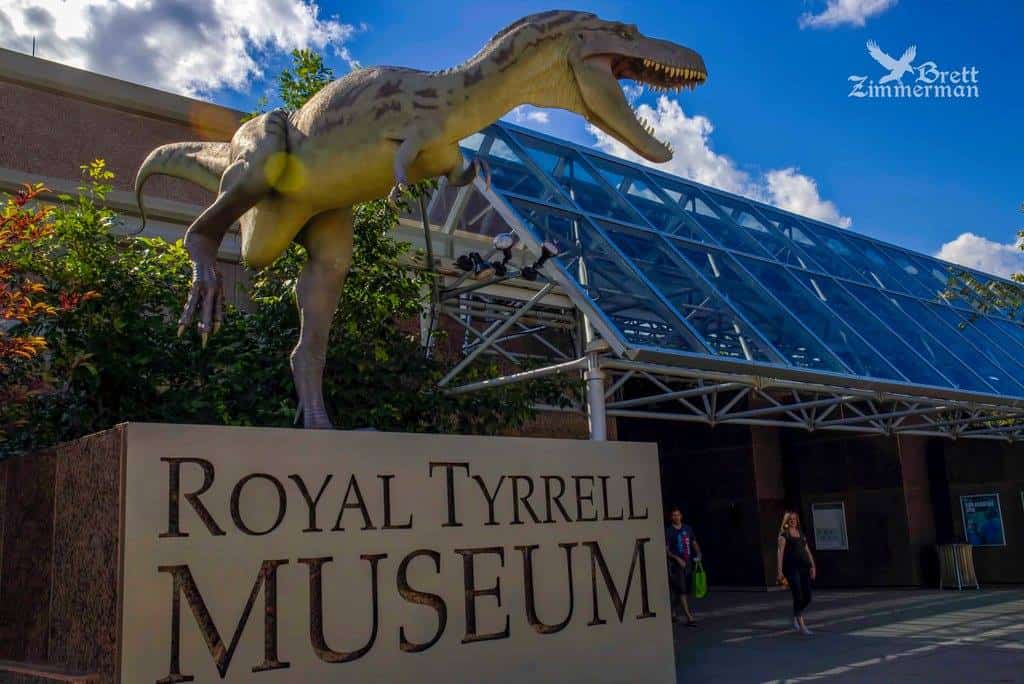 Known for its collection of more than 130,000 fossils, this museum is one of the most incredible dinosaur exhibits in the world. The Royal Tyrrell Museum of Palaeontology is located in Drumheller, Alberta. Alberta is known for being the site of some of some of the most 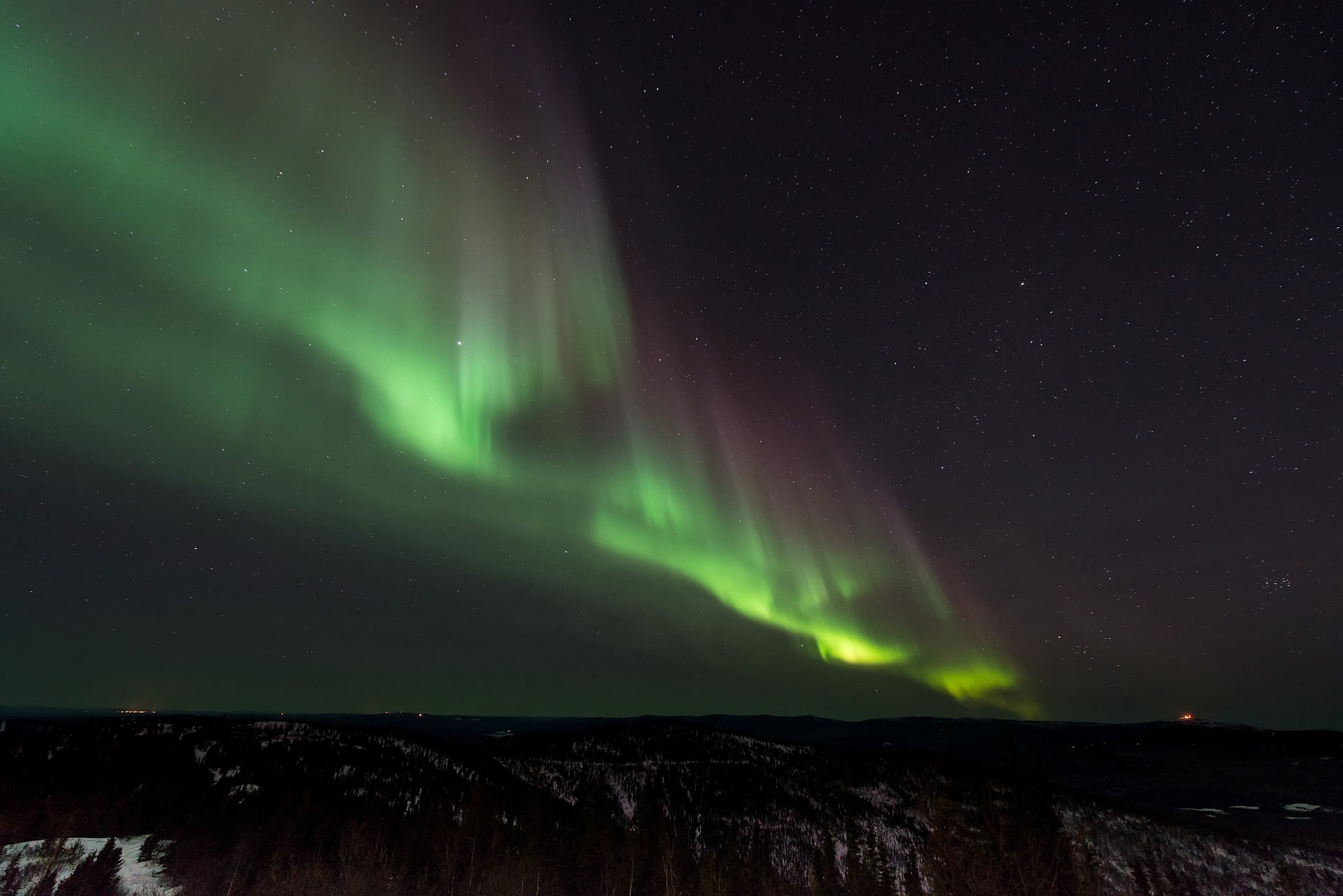 One of nature’s most phenomenal natural displays, the northern lights are on the international bucket list. With that being said, Canada’s northern cities are some of the best places to observe this natural wonder in all its glory. Whitehorse is home to a couple of companies that provide viewing tours to see the them along with some incredible excursions such as dogsledding and ice-fishing. 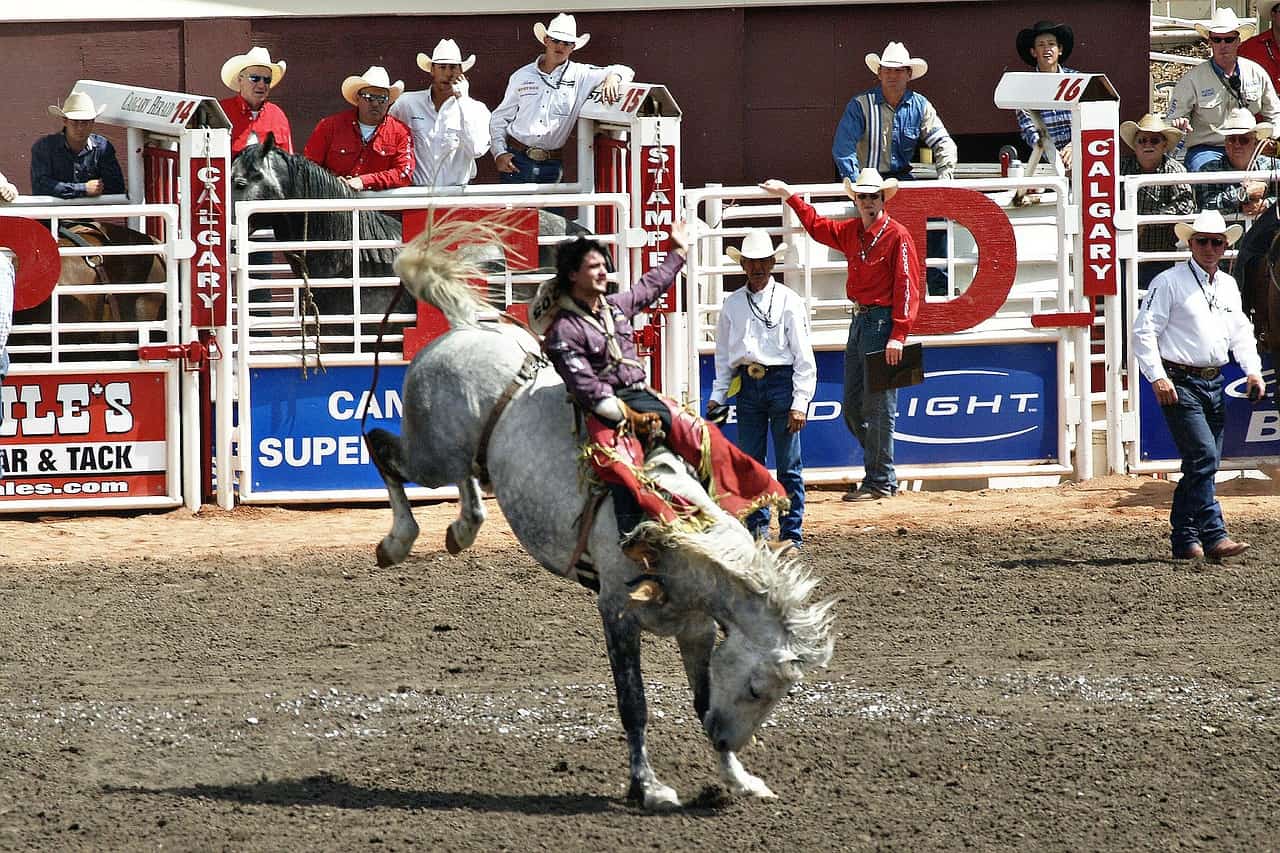 An internationally acclaimed rodeo located in Calgary, this annual event is a great deal of fun. From calf roping, barrel racing, bull riding, and much more, there are a number of exciting performances to watch. What’s more, the event hosts a number of phenomenal musical guests, mouth-watering eats, and much more. 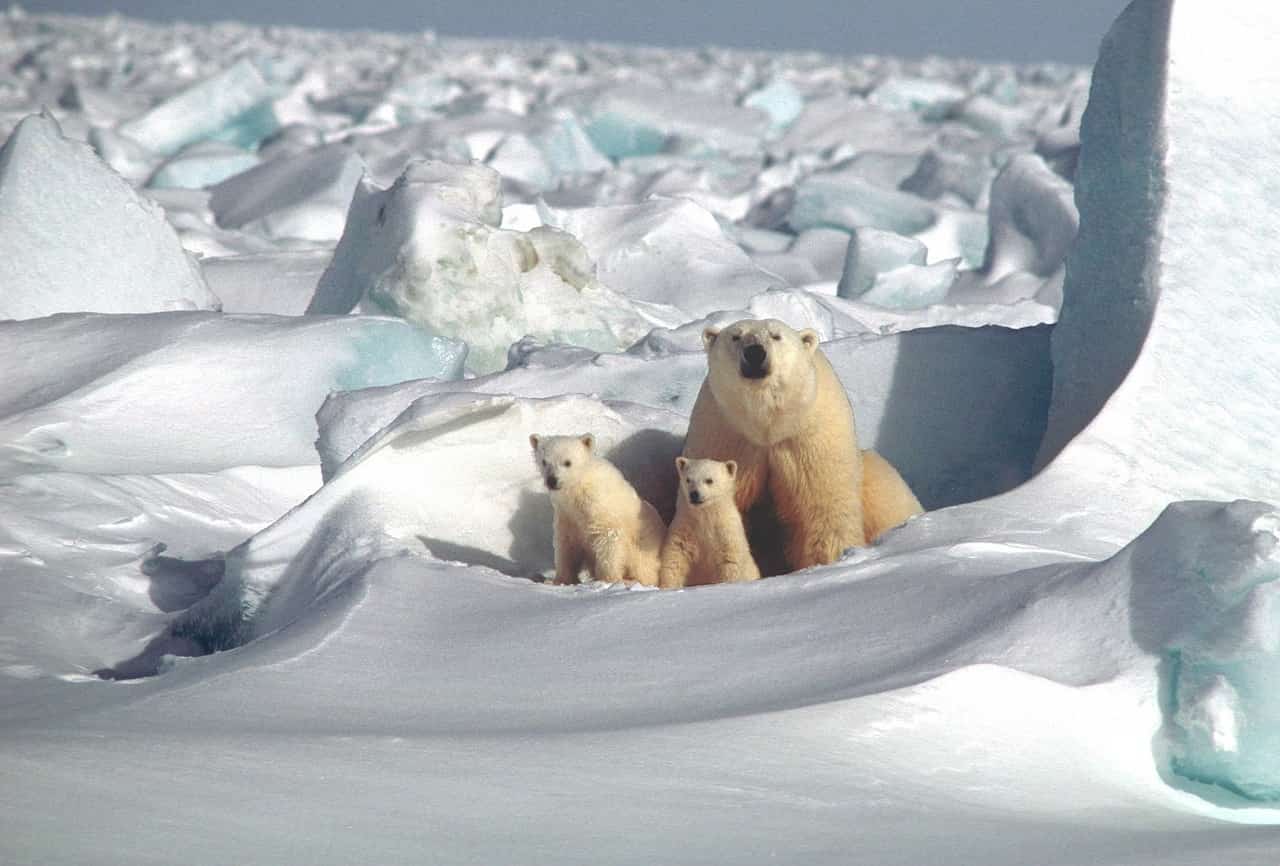 Churchill, Manitoba is one of the only places in the world that people can observe these majestic creatures in the wild from civilization. Indeed, there’s nothing like seeing these ivory giants in their natural habitat. The best viewing times are between October and November, and there are guided walking and vehicle tours. 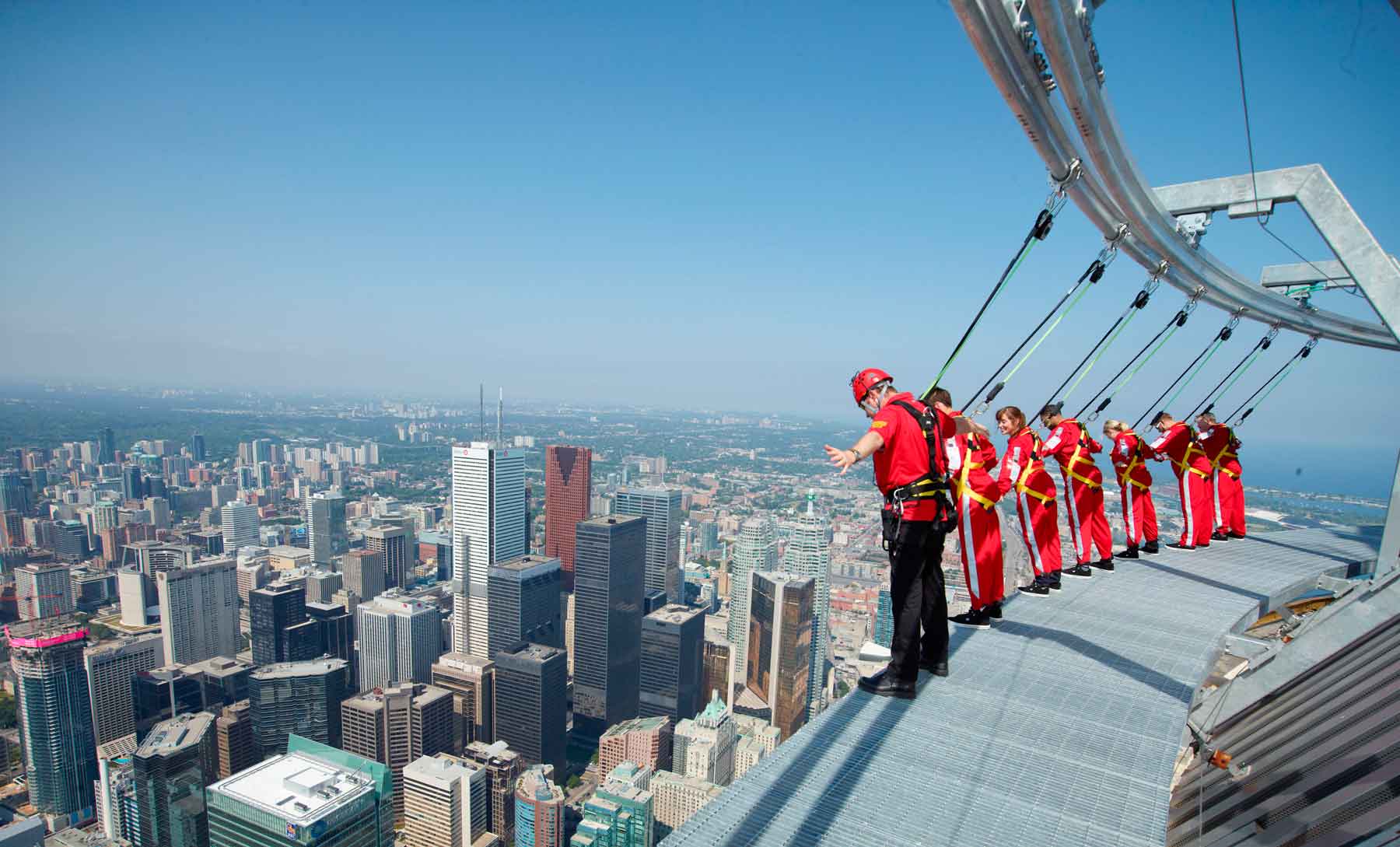 While the view from the the CN tower is breathtaking, the CN Tower Edge Walk is exhilarating. Not for the faint of heart, this adrenaline pumping edge walk is frightening and fabulous. You’ll get the opportunity to stand right at the edge of the tower and stare out at the sea of skyscrapers, landmarks, and lakes in the distance. A magnificent experience.

The first known evidence of European presence in the Americas is located at the  tip of Newfoundland’s Great Northern Peninsula. Declared a UNESCO World Heritage Site, this incredible landmark is the site of the Norse Expedition that sailed from Greenland over 1000 years ago. The Viking ruins of a small encampment of timber-and-sod buildings is an incredible piece of history set against a ruggedly beautiful landscape. 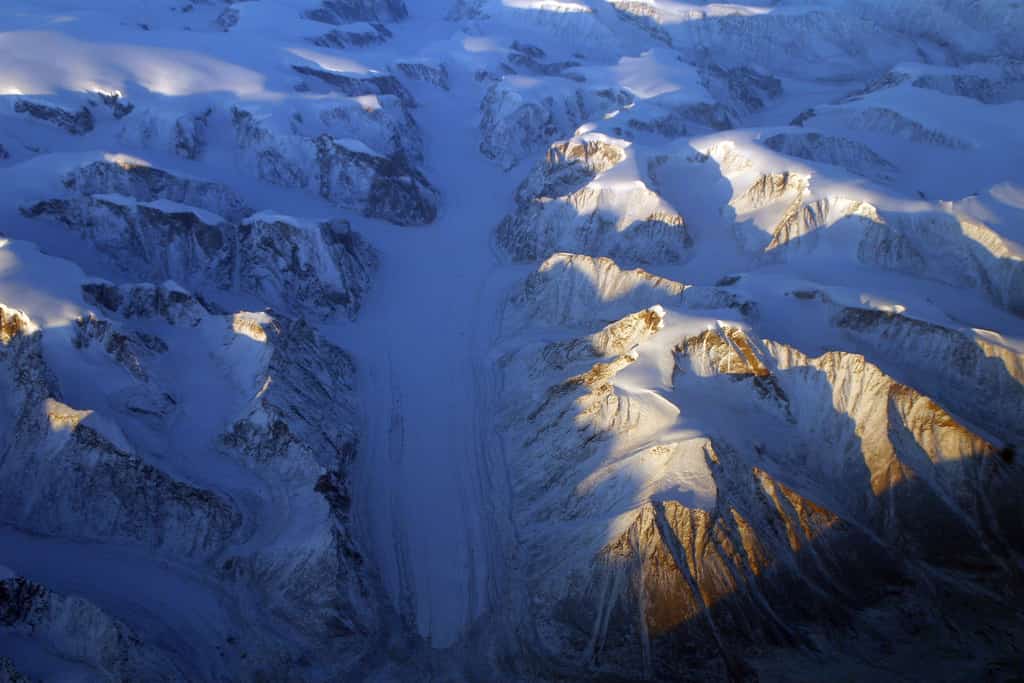 There’s nothing quite as adventurous as venturing into the great expense of the arctic tundra. What’s more, the summer months in Nunavut provide passers through with a full 24 hours of sunlight. Indeed, this is a great time to see one of the most breathtaking places on the planet. There’s something haunting being amongst the endlessness of the elements; a profound quieting of the spirit comes to those visiting this serene place. 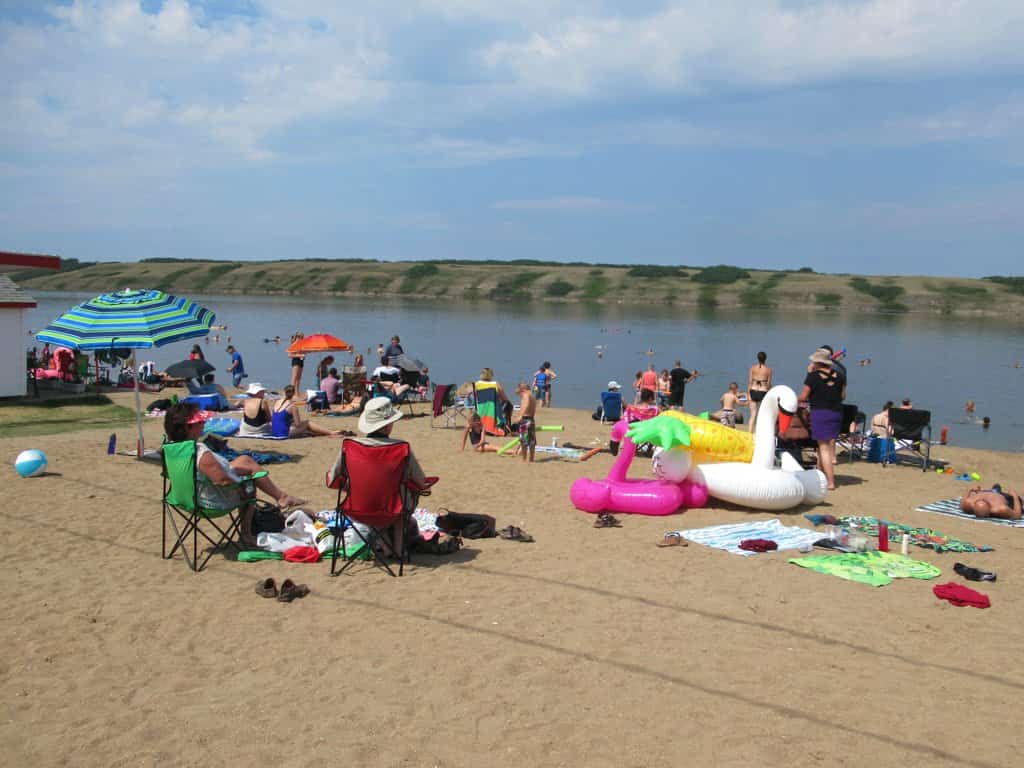 Little Manitou is a small saltwater lake about 120 kilometres south-east of Saskatoon. With a mineral density three-times salter than the ocean, it enables swimmers to float effortlessly on their backs. The lake formed during the last ice age by the receding glaciers. The lake contains sodium, magnesium and potassium salts, and has approximately half of the salinity of the Dead Sea. Manitou Springs Resort and Spa is situated on the banks of this breathtaking lake, and is the perfect place to enjoy this destination. 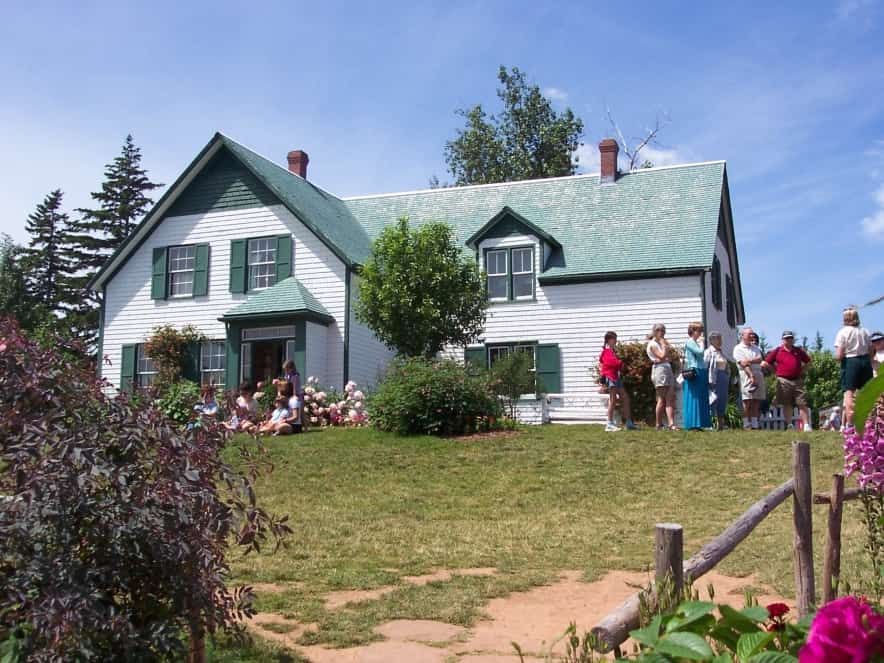 The famous Green Gables house is located in Cavendish on tiny Price Edward Island. Popularized by the hit book Ann of Green Gables by Lucy Maud Montgomery, this location draws tourists from across the globe. Montgomery never lived in the house, but she based her epic 1908 tale around it. In fact, the remains in tact today as a visitor’s centre.

Take a Scenic Drive on the Cabot Trail 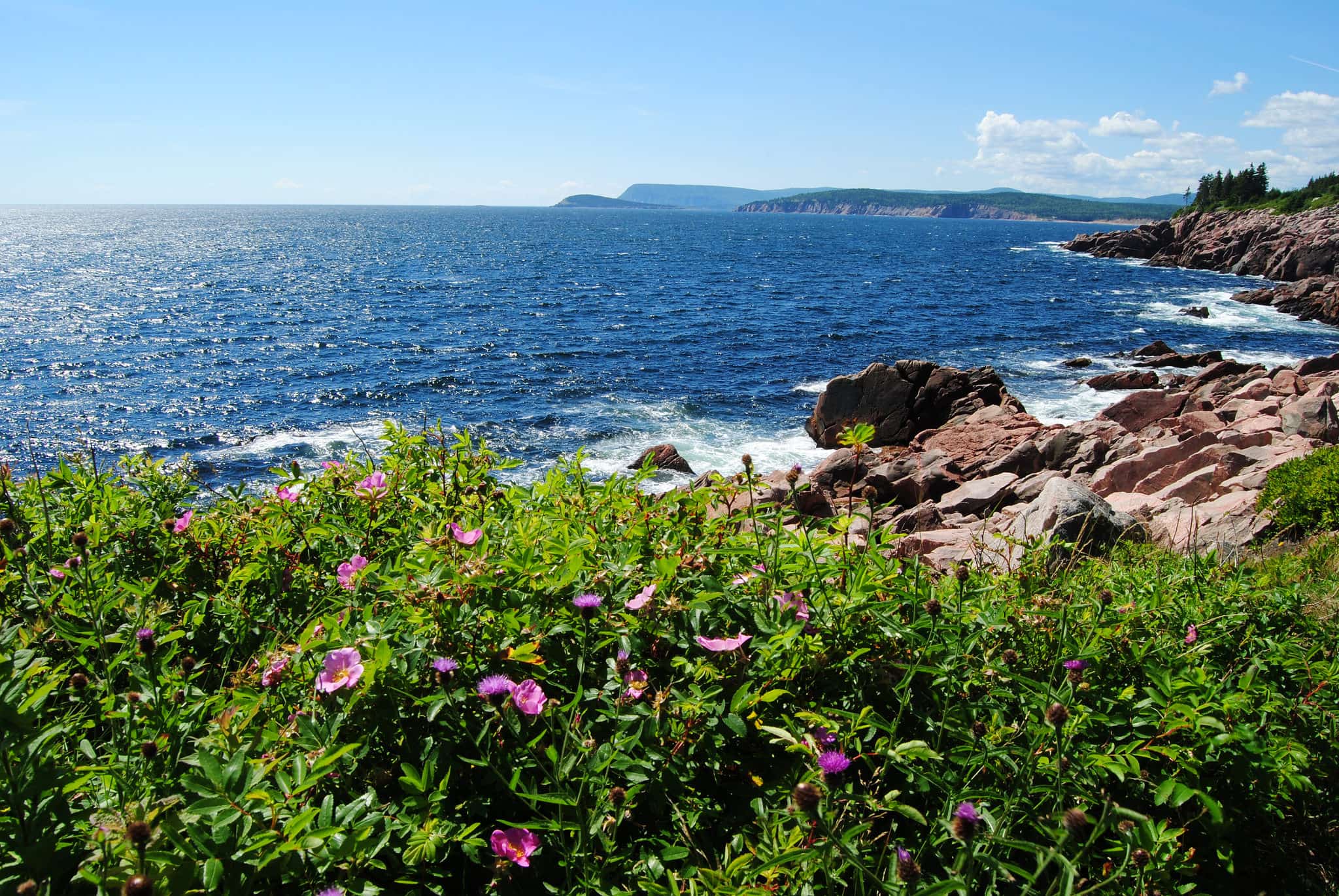 Nova Scotia’s most scenic road offers some of the most picturesque views in the entire world. In fact, Travel + Leisure magazine has called Cape Breton Island, home to the world-renown Cabot Trail, one of the world’s must-see islands. This beautiful road runs along the coast and offers sweeping views of the ocean and the beautiful countryside. What’s more, this island offers a plethora of incredible hikes. The island’s tourism website even encourages a hiking challenge in the Cape Breton Highlands National Park. They welcome visitors to experience 10 shorter trails while discovering a variety of habitats – Acadian, Boreal, and Taiga.

Visit the Hockey Hall of Fame

Known as Canada’s game, this Toronto hall pays tributes to the greatest players to ever grace the ice. A new app allows you to choose from over 50 customized tours based on NHL teams, countries and positions, as well as a tribute to women’s hockey, stories that inspire and surprise, scavenger hunts and games.

Journey Behind the Falls

I love being a tourist in my own country. #niagaraparks #explorecanada

Niagara Falls is home to Horseshoe Falls, the largest of three impressive, towering waterfalls located on the border Canada/USA border. The Horseshoe Falls drop about 188 feet, and draw a litany of spectators all year round. The observation deck at the foot of this 13-storey-tall wonder will leave you breathless (and maybe a little bit wet), but don’t forget the viewing portals cut straight through the rock, offering a once-in-a-lifetime view of one-fifth of the world’s fresh water crashing down in front of you. 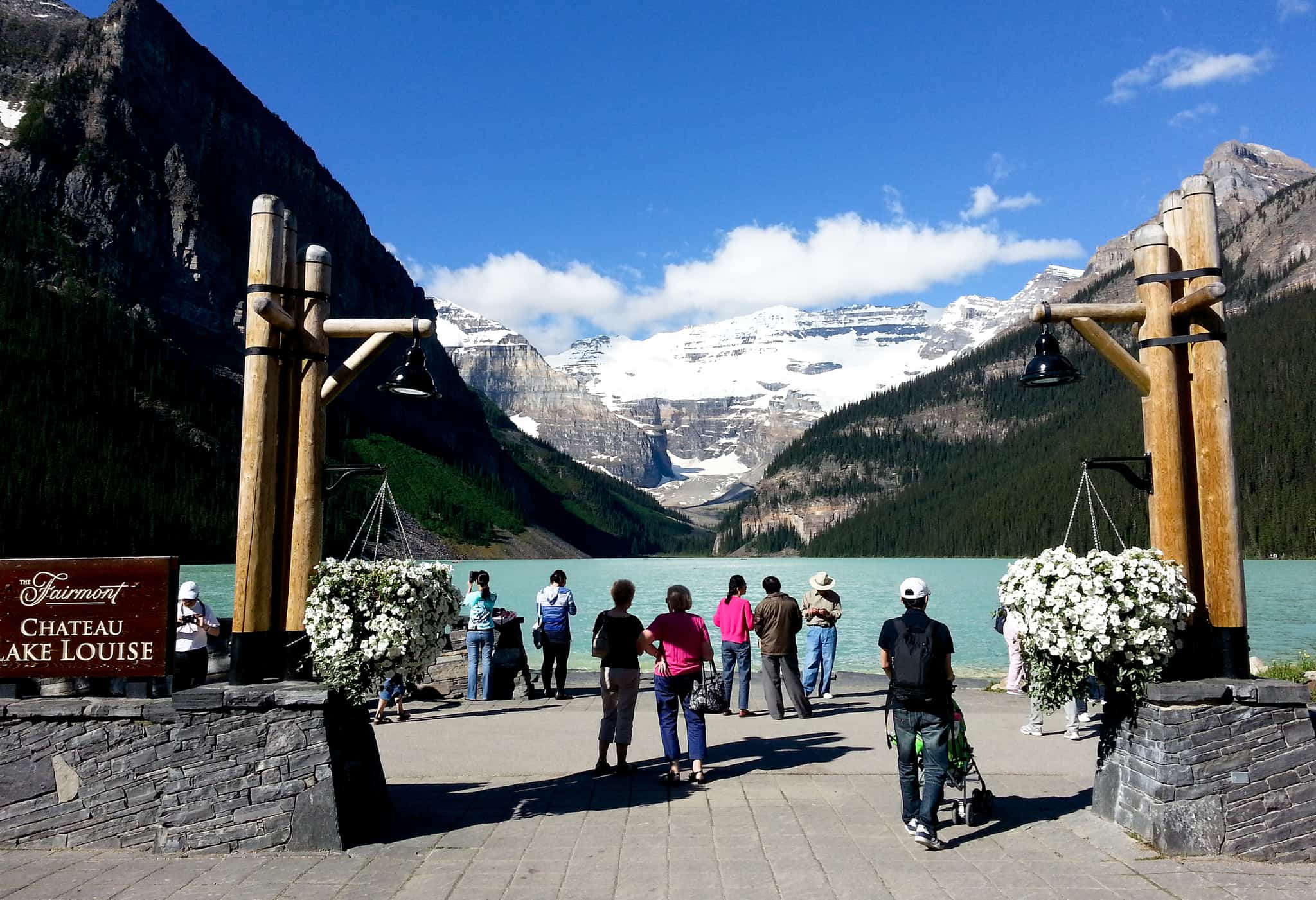 This incredible lake is a major tourist destination located in Banff National Park in Alberta’s Rocky Mountains. The emerald colour of the water comes from rock flour carried into the lake by melt-water from the glaciers that overlook the lake. Fairmont’s Chateau Lake Louise is located on Lake Louise’s eastern shore. It is a luxury resort hotel built in the early decades of the 20th century by the Canadian Pacific Railway. 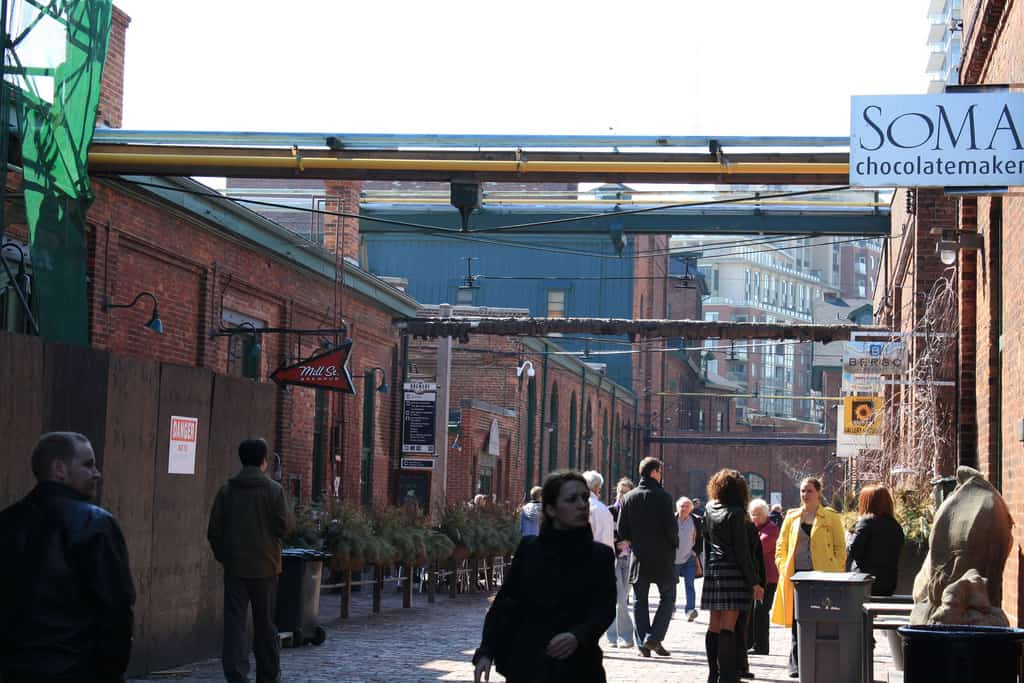 Set in charming 19th century buildings that once housed a large whiskey distillery, the pedestrian-only Distillery District in Toronto draws ample crowds to its cobblestone streets. The area has a multitude of hip indie restaurants, bars and boutiques. Art lovers also appreciate the many galleries, outdoor sculptures and dance, music and stage performances.

This incredible park links the Alberta’s prairie lands with the cascading Rocky Mountains. There are numerous activities to enjoy within the park including natural attractions like the vivid red canyon to mist-cloaked waterfalls. Alternatively, you can check out the postcard-perfect community of Waterton Park, with great day hiking, a historic 1927 hotel and a range of water activities. 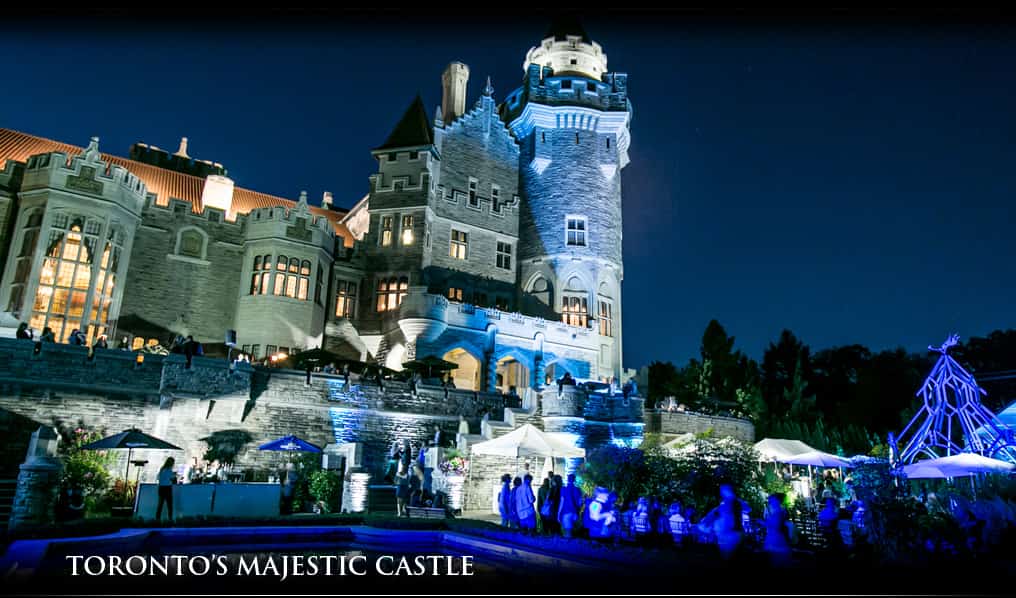 While Canada is a fairly young country, it still has a couple of really impressive historical monuments. Casa Loma is one such place: Sir Henry Mill Pellatt financed the castle, and it has been open to the public for tours for years. The website describes how, “An unabashed romantic, Sir Henry engaged the noted architect E.J. Lennox to help him realize a life-long dream – the creation of a ‘medieval’ castle on the brow of a hill overlooking Toronto. Begun in 1911, it took 300 men nearly 3 years to complete and cost $3,500,000 at that time. Sir Henry enjoyed Casa Loma for less than 10 years before financial misfortune forced him to abandon his castle home. We hope you enjoy this intriguing legacy of an extraordinary Canadian.

Formerly known as the Queen Charlotte Islands, the Haida Gwaii form an archipelago off British Columbia’s west coast. On shore they are filled a lush, temperate rainforest, bountiful wildlife, and a rich culture. Researchers cite that the earliest evidence of human life may even be found in this area. There is evidence that dates back over 14,000 years ago. 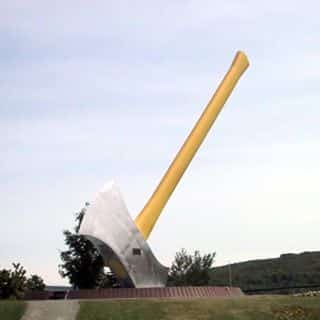 Equally as Canadian as the “good ol’ hockey game,” lumberjacks are synonymous with northern nation. Indeed, this giant axe is located in Nackawic, New Brunswick, which was also named the Forestry Capital of Canada. The axe’s blade is 23 feet in length and made of 55 tons of steel, while the handle soars 50 feet into the air. The axe also contains a time capsule for future generations to enjoy. 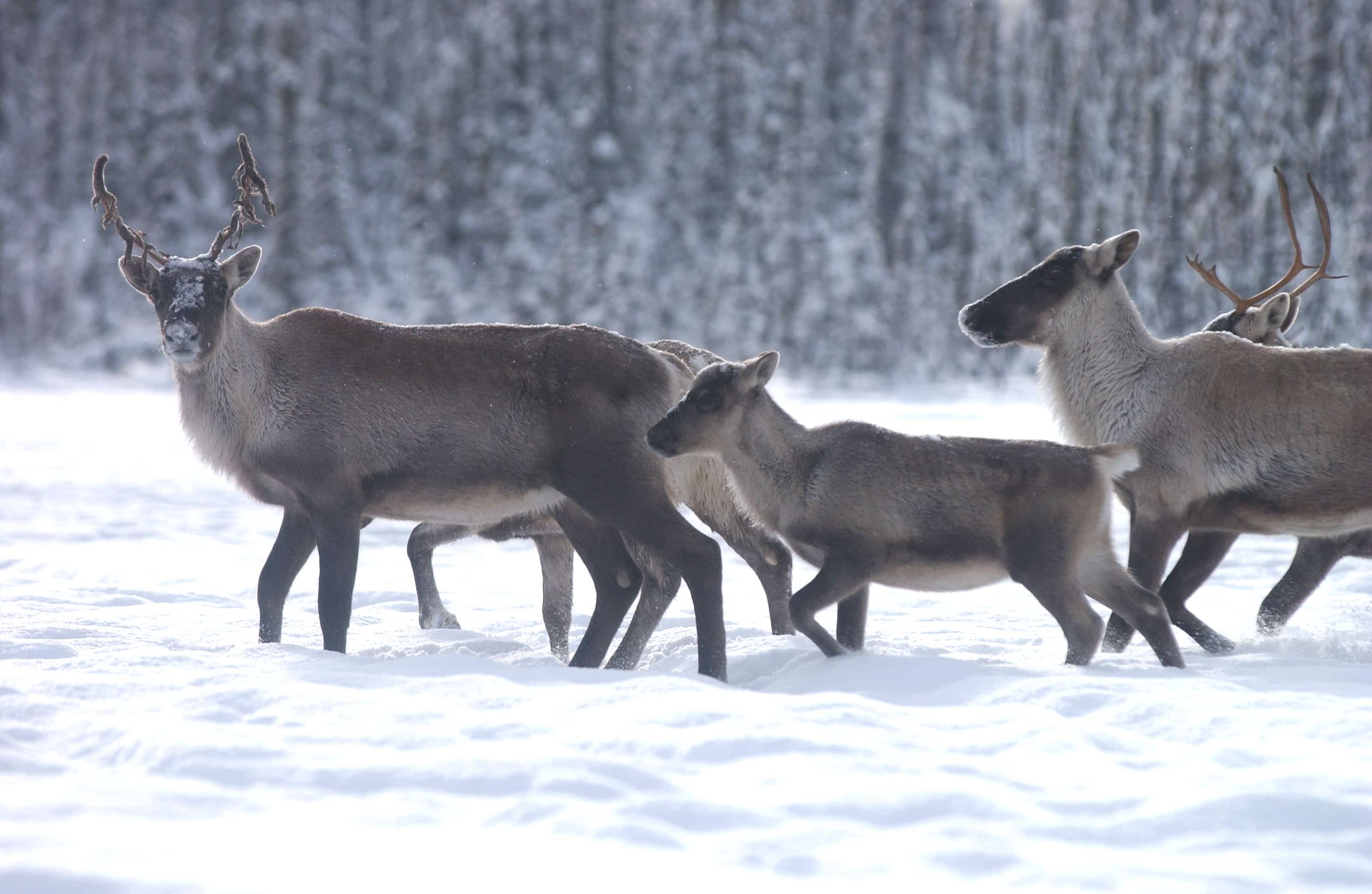 The Itcha Ilgachuz Provincial Park is also home to one of Canada’s most beloved native species, the caribou. These majestic animals are a truly a sight to behold, and there’s nothing quite like seeing them on their migration. What’s more, these mountain ranges have the largest herd of caribou in southern British Columbia. In addition, seeing the migration on horseback makes the experience all the more magical. There’s nothing like the feeling of sighting these beautiful animals while riding through this beautiful terrain on a horse.

A centre located in Golden, British Columbia provides a once in a lifetime experience to visitors looking to try something totally unique. This incredible hike let’s you walk alongside wolves in this breathtaking forest. The wolves roam freely around you and treat you as a member of their pack!  Qualified wolf handlers are always around to ensure that the experience is completely safe. For this tour, you will need to make a reservation.