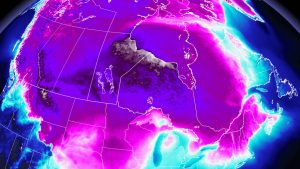 Arctic air chill has been circulating across Canada, people have been grabbing the parkas…and for good reason.

All of Canada, as of Wednesday morning, was below freezing temperatures simultaneously. Now, that is taking #inthistogether to a whole new level.

What this means is that every cm of the 10million sq-km of Canada hit below the freezing mark at the same time. This is truly a rare feat.

How Did All Of Canada Hit Freezing Temperatures?

This required various parts of the atmosphere to work together. Every province’s capital, had to hold that frigid arctic air chill from coast to coast, starting in Victoria.

To date, Victoria had only spent 28 days below the freezing mark this century.

However, due a ridge set up near Alaska to buffer Pacific jet and allow some cold air to to stream south and a disruption in the polar vortex, made for blasts of Arctic air and Siberian air to come south. In addition a blocking ridge in the North of Canada locks and also shunts cold air. Therefore, this created a “trap” with no escape of the blasting cold air.

As a result we have a frozen country from coast to coast.

The Arctic Air Freeze is Not Over Yet

This occurrence of all of Canada’s capitals being frozen together only happened twice before this century: December 19 and 20, 2008, and February 5 and 6, 2014.

However, this week, marks the latest widespread Canadian chill. The Weather Network reports that “2021 threatens to do the unheard of — three consecutive days with below zero temperatures across all of Canada.”