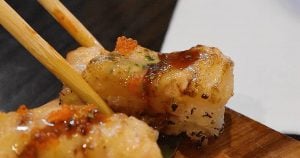 Sushi, sashimi, ramen, tempera – those just a few highlights in the delectable world of Japanese cuisine. Being the birthplace of the California roll, it’s not entirely surprising that Vancouver has a large variety of Japanese eateries catering to our every whim.

But in a sea of options, just exactly where is the best Japanese restaurant in Metro Vancouver? This is not a question to take lightly in this city, so we gathered the opinions of 9 local foodies.

$38 for aburi salmon oshi ($11), scallop oshi ($13), and beef oshi ($14). Their aburis are really yummy! I love the aburi sauce – it adds extra butteriness to the fish! The beef one has to be my favourite! The beef was seared to perfection and it was so tender. If you are close by, definitely have to check this place out! What is your favourite sushi? . . . . This is at Victoria Sushi (Royal Ave. – New Westminster) . . . . #foodblogger #vanfoodie #foodcoma #instafood #foodlife #604now #foodstagram #vancouver #f52grams #vancitybuzz #eeeeeats #foodoftheday #instafoodie #curiocityvan #604food #dishedvan #foodporn #604foodie #mixvancouver #yelpvancouver #vancity #britishcolumbia #dailyhivevan #gastropostvan #igvancouver #nomsmag #604eats #crunchvancouver #victoriasushi #aburi

What they had to say about it: My nomination has to be Victoria Sushi. While their pricing is more on the affordable end,  the quality is on the higher end. My favourite is their beef oshi sushi. Seared to perfection, I love how tender and flavourful it is. I’m drooling just thinking about it!

The increasing number of food selections in Vancouver really goes to show how our food scene is evolving. — Similar to Tonkatsu, Gyukatsu is rare beef tenderloin battered with panko breadcrumbs. It’s served with a hot stone plate that allows you to grill the cut of steak to your liking 🥩 — The innovative dish gained its popularity in Japan around 2015-2016 and can now be found in various spots in our city. Which ones have you tried so far? #BlackholetummyAdventures — 📸: Wagyu Beef Set ↔️ Swipe to hear the mesmerizing sizzling sounds!

What they had to say about it: The Gyukatsu Wagyu Beef Set is my favourite! Wagyu beef tenderloin lightly battered on the outside served with a hot stone for you to cook to your liking – it’s as heavenly as it sounds. The set also comes with traditional Japanese sides like natto on rice. One word: YUM!

Can we just take a moment to appreciate how beautiful this is? It was my first time at @kingyo_izakaya_van . I was expecting this place to be more fusion but they actually have quite a good selection of traditional Japanese food. This sashimi bowl was sick! Oh btw, this place also isn't expensive for lunch at all! We were able to have a huge meal under $20! #sashimi

What they had to say about it: Can we just take a moment to appreciate how beautiful this sashimi bowl is? Kingyo Izkaya actually serves a good selection of traditional Japanese food and people can enjoy a huge and delicious lunch under $20. Besides the sashimi bowl, I also highly recommend their pork cutlet.

Where to get it: 871 Denman Street in Vancouver

kokoro mazesoba 🥚 — 📷 Cheese Mazesoba, Pork Gyozas — 3rd time here at @kokoro_mazesoba and somehow I managed to order a different bowl every time I come! This time I got the Cheese Mazesoba and didn’t like it that much. The cheese were in HUGE chunks that didn’t melt at all and the sauce was too spicy for me 🌶🌶 The pork gyozas were quite small for the price and there was so little filing. It’s also quite oily, would not recommend 😩 My favs 💗 from this restaurants are the Mentaiko Cream and Zenbu Mazesoba as well as the Tokyo Iced Milk Tea (ask for less ice bc they put hella ice in there!!) . . . . . . . #nomsofvan #vancouver #vancouvereats #vancouverfoodie #vancouverfood #dishedvan #dailyhivevancouver #nomsmag #vancityfoodie #vancityeats #vancityfood #yvreats #604eats #604food #yvrfoodies #foodcouver #eatcouver #yelpvancouver #foodiesofig #foodstagram #foodphotography #mazesoba #kokoromazesoba

What Jovi had to say about it: The hottest Japanese eatery currently is no doubt Kokoro Tokyo Mazesoba. They introduced mazesoba, which is a soupless mixing ramen to the Vancouver food scene! Their noodles are chewy and the sauce you mix with is extremely flavourful. You definitely need to try out the Zenbu and Mentaiko Cream Mazesoba — it’s the best!

Where to get it: 551 Seymour St in Vancouver

I FEEL SOBA-LESSED THAT | when I crave for something, we can go there to get it. I recently had a craving for @kokoro_mazesoba 😍 ___ This would be my third time going back, and I don’t know if it’s the decadent sauce, the chunks of slow braised cha-siu, or the soup-less thick noodles that get me. But i love to get the ‘Zenbu Mazesoba’ 🤤🍜 ___ Did you know that you can get a free little scoop of rice at the end to mix into your sauce? And don’t forget to try out their juice and desserts 😍😍😍 ___ @kokoro_mazesoba is probably one of my favourite Japanese eateries, how about you? What’s your favourite Japanese restaurant 😋😋😋

What they had to say about it:  A relatively new kid on the block, my pick goes to Kokoro Mazesoba. I can’t decide if it’s the slow braised chasiu, the decadent sauce, or the thick broth-less noodles but this Japanese eatery really hits the spot every time. The style of noodles is very interesting because there is no soup, but the many ingredients and sauces in the bowl speak for itself. After mixing it all together, it makes for a delectable mash up. Don’t forget to ask for a free scoop of rice at the end so you can mix it in with the remaining sauce! My favourite dish is the ‘Zenbu Mazesoba’ because it comes with so many tasty components!

Where to get it: 551 Seymour St in Vancouver

@greenleafcafeburnaby has some of the best aburi sushi and now their new location is serving some equally amazing fusion pasta 🍝 — Featured: Linguine Alle Vongole Bianca ($13) – Linguine, garlic and asari clam — What are some of your “must try’s” at Green Leaf? 👀

What they had to say about it: This is one of my favourite places to grab Japanese fusion cuisine. While they do serve some of the best aburi sushi I’ve ever tried, their Asian fusion pastas are equally amazing. I highly recommend their linguine alle vongole bianco which includes a generous serving of clams and sprinkled with a bit of heat.

🌟Y a k u S o b a ⠀⠀⠀⠀⠀ ⠀⠀⠀⠀⠀⠀⠀⠀⁣ ⠀⠀ ⠀⠀⠀⠀⠀⠀⠀⠀⁣ We weren't sure what to expect when we ordered this but we were intrigued by the dish when it came. The presentation was interesting and it's fun to set up the dipping sauce for the noodles. Simply dump in all the ingredients from the handle including the quail egg then mix everything together. You get an amazing sauce/soup that you dip the noodles with and wow it was all sorts of flavours in your mouth😋⁣ ⁣ 📍 @kitchoizakaya l Richmond, BC

What they had to say about it: This a place that isn’t talked about as much as the rest of its Izakaya peers but this hidden gem is definitely our pick. Their Yaku Soba dish is absolutely mouthwatering with its delicate texture and flavourful special sauce. Not only is its presentation beautiful, dipping the noodles is a unique experience on its own.

Santouka(@ramen_santouka_robson) is one of my favorite ramen places, the ramen can be customized to your liking, from changing the soup ingredients to the texture of the noodles. The price is also pretty great compared to other places. Definitely check it out if you like Ramen! 😄 . #アフタヌーンティーラブアンドテーブル #コンビニスイーツ#おやつ#食べ歩き#パンケーキ#온더테이블#好吃#먹스타#디저트그램#배불러#igersvancouver#yvrfood#yvrfoodie#vancouvereats#yvreats#vancityeats#vancouverfoodie#sydneyfoodie#lefooding#cleaneats#yvr#vancafe#torontoeats#ラーメン#vancitybuzz#londonfoodie#laeats

What they had to say about it: Santouka Ramen, is one place I highly recommend for Japanese ramen. Their ramen is a great deal and most importantly, really tasty! I like going there for my ramen fix, and the sides aren’t too bad either! Try the miso ramen with gyoza  and let me know what you think

Where to get it: 2 Locations in Vancouver:

I DONUT 🍩 ever get bored of SUSHI 🍣 – 📷: Double Donut Combo @umasushi_bar Uma Sushi is the only place in Vancouver to get my fix for sushi donuts, which are only served during lunch time, from 11:30 am to 3:00 pm The current menu offers 3 kinds: 🔷 SALMON ON FIRE: aburi salmon, crabmeat, avocado, masago, furikake 🔷 TUNA LOVER: aburi negitoro, avocado, shiso, green onion, masago, furikake 🔷 SCALLOP MAYO: aburi chopped scallop, crabmeat, avocado, masago, furikake Each is $7, but I recommend trying their sushi donuts as part of the Lunch Special. The "Double Donut Combo" is a better deal ($13.50), which comes with your choice of two sushi donuts, and is served with shitake miso soup and side salad. For my combo, I chose Scallop Mayo (photos 1 & 2) and Tuna Lover (photo 3). For absolute sushi donut lovers, try all 3 for a special deal of $19, or share with someone and get 6 donuts for $36. – . . .

What they had to say about it:   Originally a humble food stall at the Chinatown night market, this sushi bar quickly became popular with a unique offering: SUSHI DONUTS! Although the concept originated from Australia and was made into a sensation on social media by a sushi chef in California, it was Uma Sushi that introduced this new sushi creation to Vancouver. Sushi donuts taste nothing like donuts, but instead are traditional sushi rolls shaped like a donut, so rest assured that they are actually much healthier without the sugar and calories. To make the sushi donuts, Uma Sushi begins with a ring of rice with thin pieces of fish mixed in, and adds on top a generous portion of fish and other ingredients. Their current menu offers 3 kinds: Salmon on Fire, Tuna Lover, and Scallop Mayo. All are made aburi-style. These sushi donuts are not only tasty but are Instagram worthy as well!

Think we’re missing a spot on our list of the best Japanese restaurants in Metro Vancouver? Let us know below!