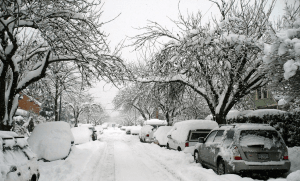 Make sure to be prepared with warm winter gear and bundle up this year.

The Old Farmer’s Almanac has predicted that Canada is headed for a record-breaking cold winter, one for the books. If you are wondering, yes snow is making a comeback and in a major way. Overall, Canada is expected to see a plethora of storms.

Initially, B.C. is expected to see a milder and drier winter than the rest of Canada. However, it is expected to be a season of intense cold as we progress into winter.

RELATED: This Could Be The Ultimate Winter Date Night Idea In Whistler

According to the Weather Network, while the rest of Canada will be snowy, BC may end up having lower than average precipitation during December. Having said that, it’s expected that the jet stream of winds will come to Southern BC later in the winter season. With that will come new storms.

This shift to stormy patterns will happen through the winter. Eventually, BC should be expecting significant snowfall in Vancouver and the Lower Mainland, Victoria, and the Okanagan Valley.

So while, the start of winter may be mild in BC, colder than normal temperatures will appear January and February, and potentially linger well into March.

Be sure to stay warm and stock up on that Vitamin D.