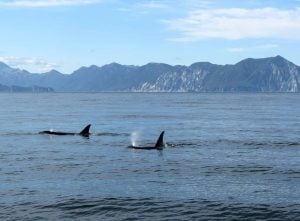 A group of B.C. kayakers experienced a close encounter with orcas this past weekend.

Among that group was long distance swimmer, Debbie Collingwood, who saw the whales during a three-hour swim near Bowen Island.

RELATED: Turquoise Lakes In BC Everyone Is Dreaming About Right Now

“We came around the island at Whytcliffe [Park],” said Collingwood to CBC News. “And there was a pod of orcas … coming straight for us.”

During her swim, two friends kayaked alongside Collingwood, where the trio nervously watched as a group of three or four whales swam close by.

When the whales came closer, one friend became concerned about Collingwood’s safety. While he recorded the scene, the friend told Collingwood to “tuck your legs up by the hall of the kayak.”

After a few minutes, the whales swam away, leaving the group in safety.

“When I recovered I realized they weren’t that interested in us at all,” said Collingwood. “I started to feel some awe. But definitely some fear.”

Other B.C. adventurers have spotted orcas over the summer, including another group who saw whales near near the Vancouver coast.